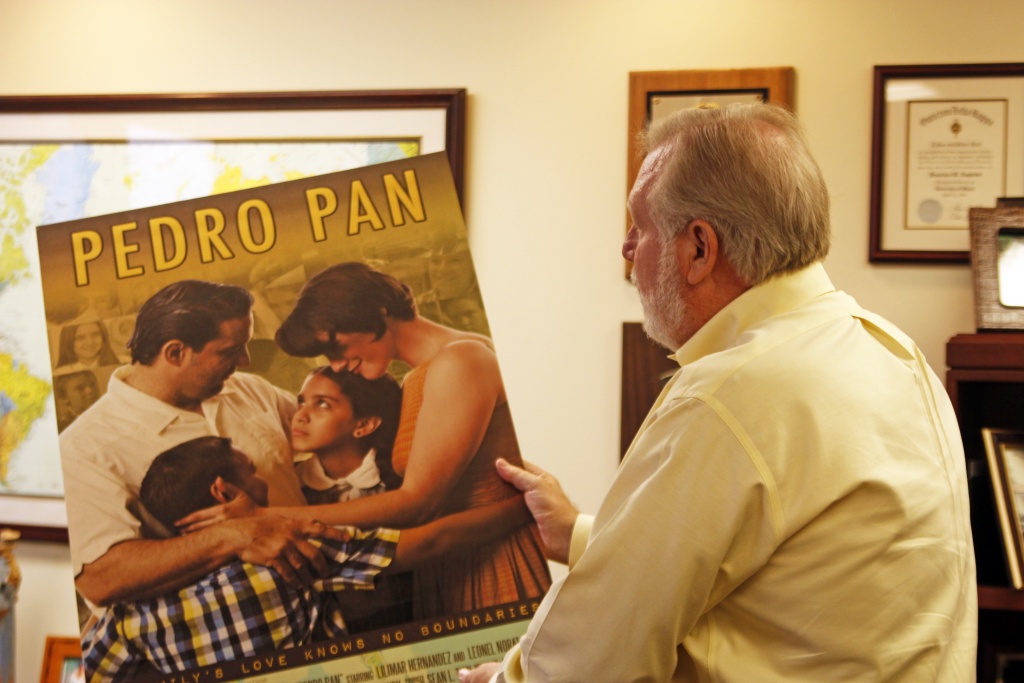 Frank Angones, president of the Florida Bar Association, views a poster of a film that chronicles the Cuban Pedro Pan exodus. (Photo by Matthew Remold)

The captain fidgeted with gears, while the passengers fought back tears.

Once the cabin door closed, the fears of living under Fidel Castro’s communist control began to fade.

This scene was the culmination of efforts by Monsignor Bryan O. Walsh, the Catholic Welfare Bureau and James Baker, headmaster of Havana’s Ruston Academy, to launch “Operation Pedro Pan.” The goal was to fly children out of Cuba and provide shelter for them in Miami.

Francisco Angones was airlifted on June 11, 1961, when he was only 10 years old. He ended up living in a foster home for several months.

“It was a Pan American Airlines flight,” Angones said. ”I cried my entire way here.”

Teresa Ponte, chair of the Department of Journalism + Media at Florida International University, had a similar experience during her migration to Miami.

At just nine years of age, Ponte “felt abandoned and torn away from everything [she] knew.”

Ponte moved in with her aunt, who already lived in Miami, making her transition somewhat easier in comparison with Angones’, who ended up in a foster home when he arrived. Both Angones and Ponte eventually reunited with the rest of their families.

“My sister was two years old when I left,” Angones said. “Everyday I wondered if she would remember me.”

When they finally met, he was pleasantly surprised.

“What struck me was that my sister called me ‘Achi’ [his nickname], and ran towards me. It was a moment I will never forget.”

After living in exile for three months, his family reunited at Miami International Airport. Angones would later graduate from the University of Miami and become a human rights lawyer and president of the Florida Bar.

“This country opened its doors and gave me opportunities to advance and accomplish what I have accomplished,” Angones said. “Even though you aren’t born into wealth and prestige, you can still achieve an advanced level of success in this country.”

Ponte also seized her new life and made the best of it. Before her FIU days, she worked as a producer for NBC News, CBS, and Telemundo, actively involved in expressing her desire for equality through journalism.

“Things worked out well for me,” Ponte said. “Now I have a moral responsibility to use my voice and bring justice to those who need it.”

Seventeen years later, other Cuban citizens had the chance to flee Cuba en masse. But this second wave wasn’t as pleasant.

After an attack on the Peruvian embassy in Cuba, Castro allowed prospective migrants to leave the island via boat on April 20, 1980. More than 170 boats, previously anchored in the Port of Mariel, just west of Havana, became the vessels of the Mariel Boatlift.

The economic crisis that dawned over the streets of Cuba compelled migrants to follow in hot pursuit of a new life. Castro encouraged all criminals to move out in an attempt to make a nation of only law-abiding citizens who supported his regime.

“Cuba had a very negative atmosphere at the time,” said Faustino Alberto, a ‘Marielito,’ 77. “The American government opened a door for everyone to leave the island.”

The negativity on the streets of Havana followed the Mariel migration. The 125,000 new Miami residents were housed in closed military facilities and the Orange Bowl. Crime rates spiked in the city, and social services were taxed to the limit.

For Tatiana Vachon and her family, the negative atmosphere worked to their advantage. After numerous attempts to leave the island, Vachon’s father decided that declaring themselves as delinquents would do the trick. He went to the American embassy and confessed his “acts of crime,” thus granting him and his family the opportunity to leave.

“Everyday was a mystery,” Vachon said. “We kept waiting to leave and when times seemed rough, we never gave up.”

Vachon reached Key West on Aug. 4, 1980, when she was 16. She and her family were transferred to what would become the Krome Detention Facility, reopened and converted from a Cold War missile base to accommodate the new refugees.

“We ate McDonald’s and went to Disney World,” Vachon said. “It was kind of exciting to see staples of American culture.”

Currently, the creative director for Memorial Health Care, Vachon, 62, has come a long way from those desperate times in Cuba.

“I have been given opportunities and I learned a lot,” Vachon said. “I did the best I could and eventually got a better lifestyle.”

These two mass migrations, though vastly different, have had a significant impact on the identity of both the Cuban community and culture.

“Miami gives us the sense of being at home,” Alberto said. “The language (bilingualism) is similar and the climate is spot on. Miami is our home away from home.”