Dennis Jara knew his son wouldn’t be an average boy. From the time he was 2, Dempsey would proudly venture around in colorful dresses, playing with dolls and wearing pants on his head to mimic long hair.

Identifying as gender non-conforming hasn’t received the most positive reactions, even with doctors. One year ago, Jara was taking his now 6-year-old son for his annual check-up. When responding to their doctor’s confused stare at Dempsey’s feminine clothing, Jara informed her of his son’s gender non-conformity, only to be told, “It’s just a phase.”

“I could kind of just see in her reaction to it and the way she was talking to me, I could tell that she didn’t agree with it,” Jara said.

“For me, that’s very discouraging that a pediatrician would say something like that without really knowing anything about it instead of asking a little more about it to understand it a little better.”

The lack of information on gender identity is not uncommon among medical professionals. Details on how a doctor should address a gender non-conforming patient are minimal at best, and license renewal classes wholly omit the information.

Organizations like the World Professional Association for Transgender Health (WPATH) provide guidelines for medical professionals. These guidelines, however, are not enforced for doctors in each area of medicine. Doctors must do their own research if they plan to be educated on the technicalities and sensitivities of gender identity. 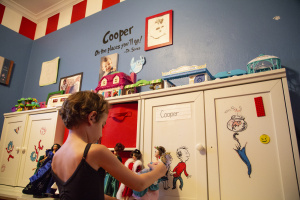 Seven-year-old Cooper Solomon organizes his dolls, each named after a drag queen from “Rupaul’s Drag Race”. (Photo by Brianna Naderpour) 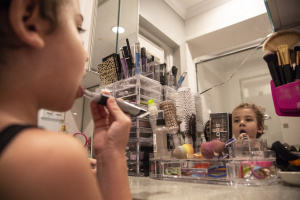 After noticing and researching the feminine preferences her son Cooper expressed, along with the spiked suicide rates among LGBTQ youth, Jennifer Solomon launched a chapter of Parents and Friends of Lesbians and Gays (PFLAG) in South Miami.

Within the group, she works to provide support and education to confused and concerned parents.

“I always say I would rather have a gay kid, a transgender kid, a gender non-conforming kid than a dead kid,” Solomon said.

Pediatric endocrinologist Dr. Alejandro Diaz said a lack of gender education has led some doctors to believe that gender is a choice.

“Some practitioners give wrong advice to parents about the way to handle this situation,” Diaz said. “Later [this] is going to increase the risk of depression and suicidal ideation in these kids.”

“Gender is not binary. It is a social construct,” Psychotherapist Noemi Marquez said. “It’s important for parents to understand that. Science is showing us that we are not born one or the other; there are many variations.”

For a child whose gender differs from what they were assigned at birth, procedures like hormone therapy are common, but not every child who is gender non-conforming is going to be transgender later in life. The current best practice, according to Diaz and Marquez, is to allow the child freedom of expression.

“Studies have shown that when a child is allowed to express his/her/its gender the way they feel it, they have less anxiety…lower risk of depression and other psychological issues later in life,” Diaz said.

“This condition is so common that every health professional needs to have knowledge about it.”

If gender nonconformity is identified early in life and the child chooses to start some type of transition, such as male-to-female, treatments are available.

Many parents lack knowledge of how to address variations on the gender spectrum when it comes to their children. Turning to their pediatrician should be an option but often doesn’t result in acquiring accurate information.

“When you are taking that oath to serve people and to look out for the best interest of a human life, that [information on gender non-conformity] should be included in the curriculum when they study medicine,” Jara said.

Maya Adam, a medical professor at Stanford University, has written a free online course addressing health across the gender spectrum. The curriculum works to help those looking to better understand and support someone they know. This course also stresses the importance of parents accepting their child.

“Kids, especially young kids, just want to be accepted by their parents,” Marquez said. “So when the adults around them are rejecting, they start to think, ‘Oh, wow, something is wrong with me,’ and curb their behaviors as much as they can.”