From STEM to STEAM: Tech merges with art in the classroom

Now he’s helping kids get their own start but instead of fixing computers, they’re tearing them apart.

“Getting people to look at different elements and say ‘You know what, I can take this, this and this and make something new,’ I think that really helps ground an idea,” Milian said. “If I have a problem to solve, do I have the necessary parts in my place? Can I use that stuff to solve my problem?”

His kids are working at Smart Bites, an organic restaurant in Wynwood, converting old computers into planting boxes as a part of Wynwood Maker Camp, which Milian, along with business partner Willie Avendano, founded in 2014. The camp operates through their technology education company 01 and works to enhance students’ confidence in the use of technology.

Other camp projects include making music digitally and creating a city to explore with virtual reality. The camp also features an Urban Hacking session that focuses on sustainable building practices — such as the computer planting box project — and designing functional urban spaces. 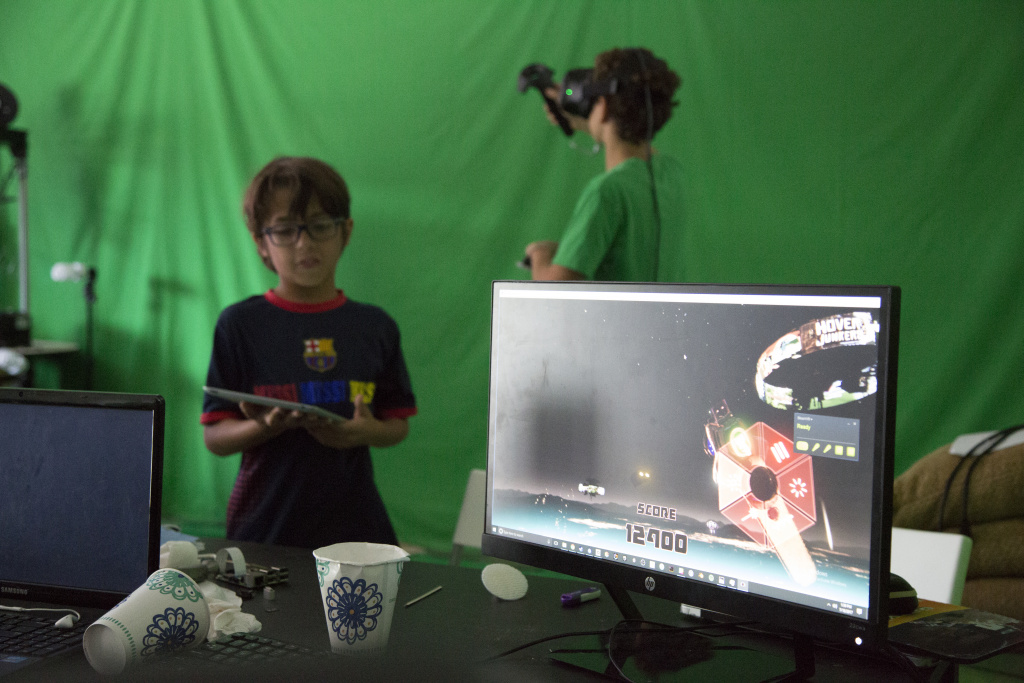 “I think knowing how to communicate and how to collaborate with designers and artists is a more refined and crucial part of education,” Milian said. “[The Moonlighter staff members] are architects and they really focus more on the design side. But we still come together to work on projects and design things.”

STEAM arose out of a concern that students were losing their creative ability.

Kyung Hee Kim, a professor at the College of William and Mary, conducted a study using the Torrance Tests of Creative Thinking in 2011 that revealed declining creativity in children since the 1980s.

Schools can receive recognition of their commitment to STEAM by following guidelines outlining curricula and activities the school must offer. In the 2016-2017 school year, 110 schools completed the program, up from 77 in the previous year.

“It [STEAM] is the best method of giving students a well-rounded education,” said Cristian Carranza, administrative director of the Division of Academics, Accountability and School Improvement in STEAM for MDCPS.

STEAM advocates argue that enhanced creative thinking from art education can benefit a student’s learning experience by cultivating problem-solving and innovation skills that are applicable in many fields.

“You’re gonna have a lot of hurdles to get over,” Derchi said. “It’s those people [creative and innovative thinkers] that can see a roadblock and find a way to get around it.”

Tech professionals also have to consider design to ensure consumers make effective use of their products.

“Learning how to design for people is very important when you’re actually making technology that is for people,” Milian said. “Incorporating the arts and design into science and mathematics really helps bring it all together and make it more human.”

According to the 2017 Kauffman Index on Startup Activity, Miami is the top city in the country for entrepreneurs creating their own businesses. The tech industry is taking advantage of this favorable environment; Refresh Miami says their community membership grew from 2,500 to 10,000 in the last five years.

“People are excited to build in Miami,” Derchi said. “We’ve seen an increase in Miami pride.”

An education that can help students take advantage of the business potential in their own backyard with their own creative ability could be tremendously valuable. Wynwood Maker Camp tries to provide this education.

“Kids don’t feel like they can have an impact on anything,” said Tom Pupo, co-founder of Moonlighter. “They just feel like all the systems and all the technologies in the world are just this massive thing looming over them that they can’t affect. By doing projects like these [the one at Smart Bites] they can see that they can actually make an impact on their own communities.”