En Route to a Smart City

Self-driving buses and the extinction of the Metrorail may seem far-fetched for Miami-Dade transit, but the future could arrive sooner than expected.

“Buses will have their own dedicated lanes, meaning less traffic, and with limited stops,” said Alice Bravo, director of Miami-Dade’s Department of Transportation and Public Works. “They’ll have smart sensors that change traffic lights and ‘speak’ to other transit, all for less money than rails.”

The buses are just one aspect of CIVIQ Smartscapes, Miami-Dade’s attempt to transform Miami into a smart city, an initiative that dates to 2014, when a proposed partnership between the county and CIVIQ Smartscapes began.

The $20 million proposed plan came to life without funding from taxpayers’ wallets. Rather, the plan credits digital advertisements that’ll appear on hundreds of kiosks as the money makers.

The system is known as “a self-sustained advertising model” according to a Miami-Dade County memorandum released in January. The kiosks — between 150 and 300 of them — are set to appear throughout the county, bringing a digital platform with the latest bells and whistles.

In the past, the systematic chaos within the public transit schedule was alleviated by county traffic apps that aimed to update information faster than terminal monitors.

“[The apps for the trains] work well because they tell you when exactly the trains are going to be leaving and coming. It makes it easy to plan your day around that,” Aaron Maxwell, a regular commuter, said. “The bus tracker apps aren’t as helpful because the buses arrive 10 minutes late and 10 minutes early.”

The new weatherproof kiosks are equipped with Wi-Fi devices, cameras to capture parking, pedestrian and automated traffic data, as well as smart sensors to test air quality and detect violence such as the sound of gunshots. They can help direct individuals to restaurants and provide safety features, like calling 9-1-1.

According to a SmartAsset study, Miami currently ranks the highest among major Florida cities for its public transportation. However, it also found that Miami car commuters spend 25.4 minutes commuting, compared with the 50.6 minutes spent by transit commuters.

“We want to become a car optional city,” Bravo said. Cities that are “bigger than ours, with more funding” have the means to finance an at-large transit rail system. But the county has to provide “rapid transit to six corridors” and needs to “be practical.”

While Miami transforms itself into a smart city, some citizens prefer the so-called old school style: verbal communication.

“I like live connections, person to person. Technology is very impersonal,” Maltide Zayas, a regular commuter, said. She makes it a point to verbally confirm with on-site supervisors as to what time the trains are coming.

Because of the expensive nature of expanding the rail system the county prefers enhancing the bus system.

“You can have three buses run together that will act and run like a train,” Bravo said, but for a fraction of the price. “Roadways and asphalt are inexpensive. And you can get parts for a bus anywhere. Train parts have to be ordered months in advance, so, if a train breaks down, it’s complex to fix.”

Despite these changes, the transit system still faces difficulties.

“I know it’s difficult for tourism. You come out of Miami International Airport and it takes a while to get to South Beach,” Jaymes Gardzinski, a University of Miami student, said. “If you’re willing to UberPool, it’s hard to compete. I got from Brickell to 20th and Collins for $1.40 last night. The bus is $2.25.” 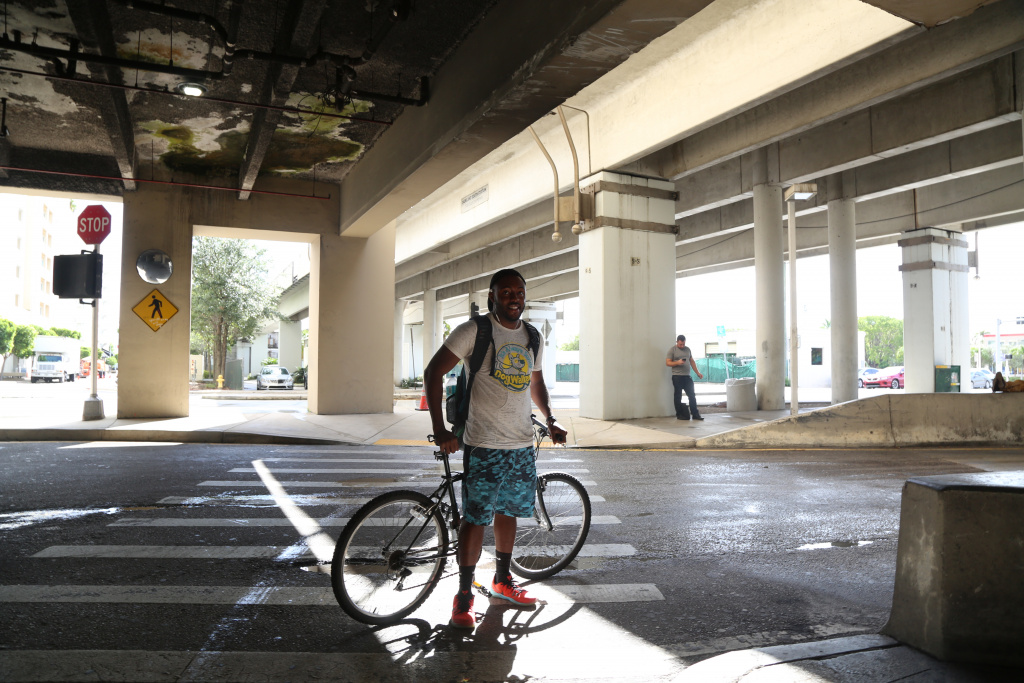 Aaron Maxwell arrives at a Miami-Dade Metrorail station to catch a train on his commute to work. Maxwell bikes to the bus, buses to the rails and then bikes to his job in Brickell. (Photo by Manuel Fernandez)

But when it comes to traffic, “the trains are actually faster than driving,” Maxwell said. “The buses could use a lot of fixing and more routes to more popular places, like the beach.”

Destini Jones, an Atlanta native, takes the Metrorail to her labs at the UM Medical Campus. The unfamiliar streets challenge her commute, but the Miami-Dade transit apps alleviate some of the stresses of navigating.

“[The kiosks] are definitely going to have a positive impact, especially since we are a city full of tourists. And for new residents. We just moved here and having Wi-Fi so we can use our phones to help us maneuver the city,” Jones said.

County leaders believe Miami’s conversion to a smart city will follow the tracks of mega cities like Chicago and New York City.

“We will be like them someday,” Bravo said, “and when we are, we want to be ready.”