By the time he started high school, though, an increasingly popular game had arrived on the scene.

“I have not always been into sports, but when I got into computer gaming, I was addicted,” Kuhns said. “Especially Overwatch. When I saw it was coming out, I was determined to be great at it.”

Kuhns is now one of more than 30 million players who play Overwatch, a first-person shooter game and one of the top five most played video games on PC or console, according to Gametrics.com. The game has become so popular that a worldwide professional league is forming with a team in the Miami-Orlando area set to begin play later this year. 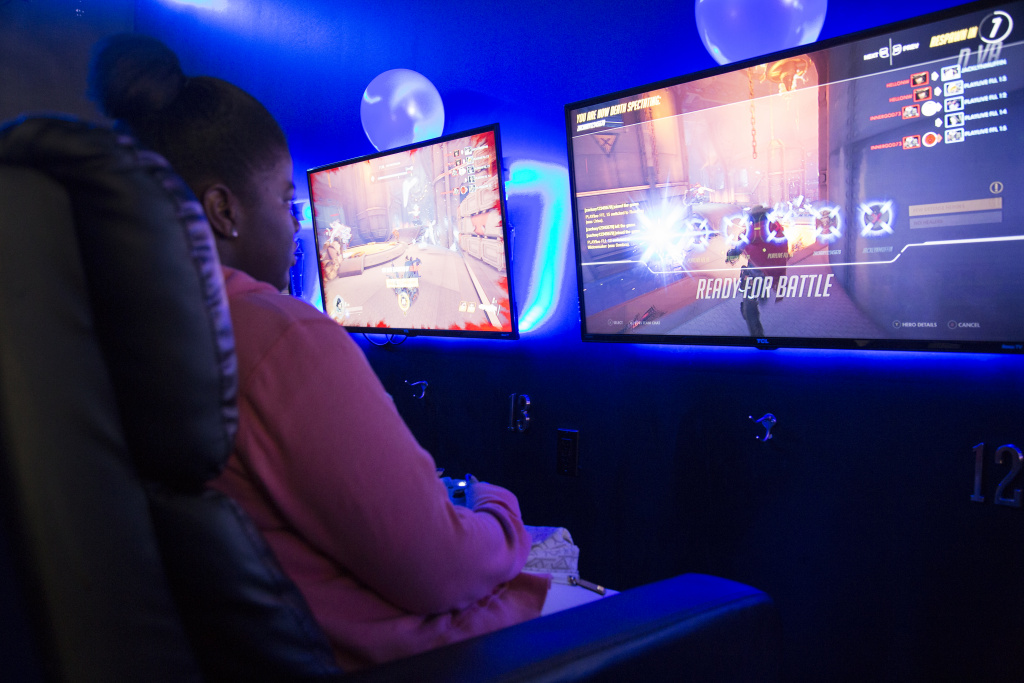 15-year-old Aniya Hope enjoys a game of Overwatch on her birthday at Play Live Nation in the Falls. (Photo by Tatyana Monnay)

“Overwatch is still relatively new but already has the chance to become a franchise with this league,” said Ricky Gomez, an amateur eSports player in Miami. “They are taking a different path adding their own rules and involving teams from all around the world to play.”

More people watch eSports, which are videogame competitions featuring titles such as Overwatch, than they do major professional sports such as football, baseball, basketball or hockey, according to an article in Barron’s magazine.

The global league will feature five North American teams and two international teams. Major sports teams such as the New York Mets and the New England Patriots have invested in eSports.

The NBA’s Miami Heat is partly financing the Miami-Orlando Overwatch team, which is being brought into the league by The Misfits, an eSports team based in Europe. Ben Spoont and Syfy Channel founders Laurie Silvers and Mitch Rubenstein founded The Misfits last year.

“Miami is already a successful city across many sports,” Joe El Ouassi, general manager of the Misfits, said in an email interview, adding that the new team and league will bring new jobs and revenue to South Florida.

One day, he said, he envisions filling American Airlines Arena with eSports spectators.

“It’s more a question of when rather than if we are going to.”

ESports is a growing phenomenon that is getting stronger by the year. According to a study by Newzoo and published in a 2017 Business Insider article, last year’s revenue of eSports was upwards of $490 million with a total audience of 323 million. This year the revenue is expected to jump $200 million with an audience increase of more than 60 million.

Much of the popularity can be attributed to Overwatch. As soon as the game was released, Kuhns created a team that practiced 12 hours a day. Eventually, he accomplished his dream of becoming a professional eSports player. In seven tournaments in 2017, he finished in first place twice and second place three times. He plans to continue playing.

“Having already put so much time into the game, and performing at the level I am, I would be crazy to give up that opportunity right now,” Kuhns said.

Many eSports players hone their skills in gaming centers. Located in The Falls shopping center in Miami, Play Live Nation is about the size of a standard classroom. It is cool and dark except for the bluish lights from about 20 40-inch TV screens. The place smells like Lysol.

Play Live Nation manager Troy Cotto believes the eSports community has the potential to become a driving force in the South Florida economy thanks to the merchandise associated with the gaming, as well as the jobs that could be created.

“And they have gotten pretty packed,” he said.

The popularity, he said, is only beginning.

El Ouassi, of The Misfits, is eager to cater to local fan bases as eSports leagues expand.

“There is a demographic of young people in Miami who do not have the interest in traditional sports,” he said, “and we are looking forward to being the team that local people can connect with.”