In a small room at the back of the Elisabeth Lahti Library in Indiantown, more than 30 people sit in chairs waiting anxiously for a presentation to begin.

The people are mostly undocumented immigrants, having come from Guatemala, Cuba, Haiti and many more countries but all have one thing in common: They don’t know what rights they have, and they’re scared of being deported. 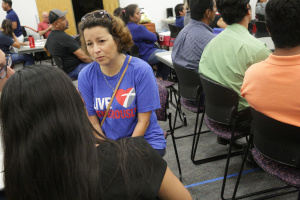 Blanca de Reyes, a counselor who works along the Treasure Coast, advises Merly on the status of her healthcare case. (Photo by Taisa Strouse) 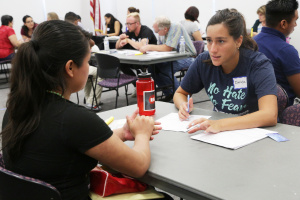 A volunteer starts a file on an immigrant woman who will soon see an attorney. (Photo by Taisa Strouse)

Immigrant families who need medical attention are among the most vulnerable. Many immigrants are unaware that free clinics exist and choose instead to deal with the problem themselves.

“We really want to make sure that people understand their rights as immigrants,” said Frances Davila, an immigration attorney for Americans for Immigrant Justice (AIJ), a nonprofit organization that represents low-income families across South Florida.

“There’s a misconception that because you’re an immigrant, you have no rights and the police can do anything to you. That’s not true, and we want to make sure that people understand that’s not true.”

AIJ helps with many common problems, and one of those is parents not wanting to get health benefits for their children.

According to Davila, many U.S. consulates deny visas to families with children who are American citizens who have received food stamps or WIC (Women, Infants and Children) support.

“Now people are like ‘I don’t want to get these benefits for my kid that’s sick or hungry because then I’m not going to be able to get this application or visa,'” Davila said.

Even those who have a legal status, such as Deferred Action for Childhood Arrivals (DACA) or Temporary Protected Status (TPS) recipients, can have difficulties acquiring health insurance.

DACA recipients are exempted from laws put into place allowing those who are “lawfully present” to access health care, and although TPS and green card holders are allowed to apply, recipients are often unaware of this.

“I can’t get health insurance. I usually feel fine but whenever my daughter gets sick I just solve the problem at home… I’ve never heard of any free clinics I could go to,” said Maria, an undocumented immigrant from Guatemala.

People like Maria will have to pay out of pocket for any health coverage they need, something which most of them are not able to do. Merly, a U.S citizen raised in Guatemala, came to America to give birth to her second child after learning the baby had complications.

Despite being a citizen, Merly was told she didn’t qualify for Medicaid. She does not know why and came to the meeting for guidance.

South Florida is home to around 450,000 undocumented immigrants, nearly 7 percent of the region’s population, according to the Pew Research Center. Organizations like the Florida Immigrant Coalition (FLIC) and Catholic Legal Services (CLS) have organized immigration clinics across the state — from downtown Miami, to Tampa, Jacksonville, Orlando, West Palm Beach and even Indiantown to serve this large demographic.

“The people who are coming to these events are families who have Temporary Protected Status, who have parents or children who are undocumented and through this they talk to an immigration lawyer for free, get a free consultation and review,” said Grace Toapanta, a volunteer and hotline coordinator for FLIC.

The turnout at these meetings fluctuates wildly — as many as 600 people could show up, or none at all. 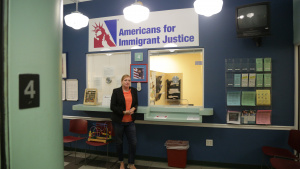 “Turnout can be uncertain. If something happens, we may see a lower turnout because people are afraid to even come and get legal services,” said Adonia Simpson, director of the Family Defense Program at AIJ.

“We had one event where rumors went around stating that it was an ICE [Immigration and Customs Enforcement] trap… that if people came, ICE would be there to arrest them.” 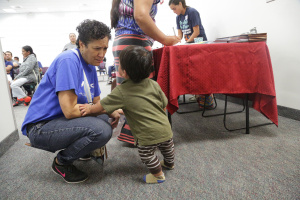 It is this fear that stops immigrants from seeking out help for themselves and their families. Although programs like the ones put together by AIJ, FLIC or CLS can alleviate the problem, the underlying issue remains.