Feminists Continue to Fight for Fairness in South Florida 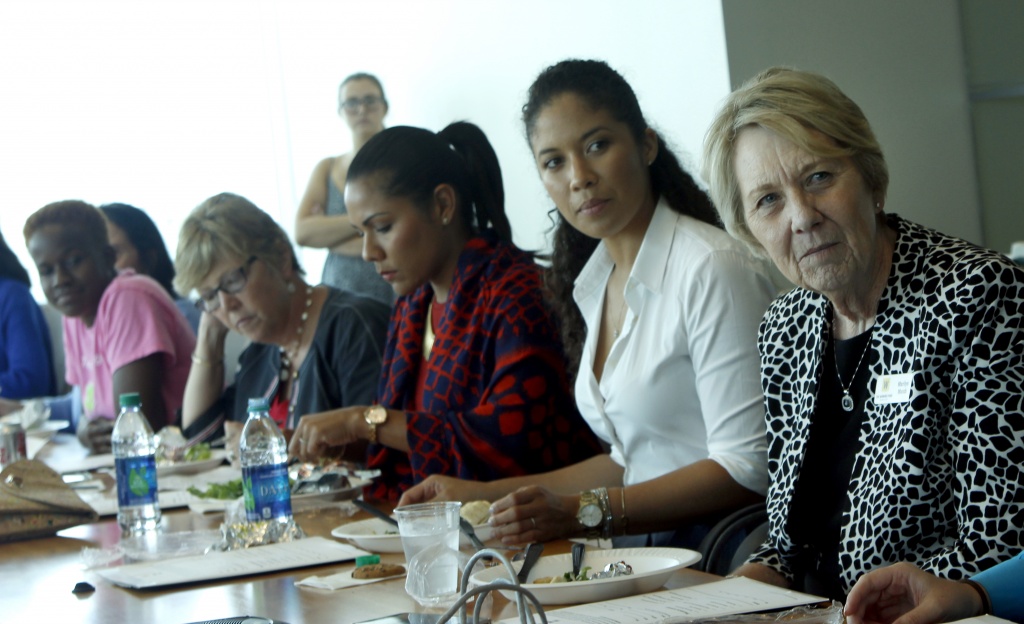 WOMEN’S SUPPORT: The Women’s Fund of Miami-Dade, which supports programs for women and girls in our community, discusses opportunities for involvement during its monthly luncheon. (Photo by Diana Riojas)

South Florida offers something to the feminist movement that few others do.

“Miami, by its very population, is so diverse and comes from so many different cultures and backgrounds, it automatically lends itself to allowing intersectional practices to work,” said Sumita Chatterjee, professor of women’s and gender studies at the University of Miami.

“Miami, I would say, is the perfect city to allow for intersectional practices to be played out.”

Intersectionality examines how different social identities — race, class, gender and sexual orientation, among others — interact with forms of oppression. In South Florida, the feminist movement has evolved from fighting for suffrage into a support network that’s accepting of very diverse backgrounds.

The first wave began in the 18th century with women’s fight for voting rights. Then, starting roughly in 1960, with Nikki Beare and Roxcy Bolton, the second wave of feminism focused on women’s workplace and reproductive rights. From 1990 to today, organizations have joined the current third wave, which pushes to be more inclusive for people of color and LGBT women.

The Women’s Fund of Miami-Dade is part of the latest movement aiming to provide an array of support services for girls and young women. Starting with only $5,000 in 1993, the Women’s Fund has given out $3.7 million and funded more than 480 programs.

“We really believe that the young women of tomorrow have a lot of wonderful resources that they may not be aware of,” Executive Director Marilyn Fizer March said. “They need to step up and understand and be able to carry us into the future.”

Women’s History Coalition of Miami Dade County Inc., founded in 1983, also honors members of the feminist community with the Women of Impact award.

“We think it is extremely important that you never forget the history of how hard women have struggled to get as far as they have,” said JoAnn Roberts, president of the coalition. “Women can be anything if they have the ambition.”

“There were lots of women that were stay-at-home moms, and some of these women decided they wanted to run for office and had no support,” said Joanne Sterner, 72, a NOW member and Broward chapter president. “So they joined the NOW chapters. Women’s issues are different in 2016 than in the 1980s.”

Due to the rapid advancement in technology, South Floridians are currently on the brink of a new wave of feminism, observers say. Platforms such as social media, blogs, podcasts, radio and more can inform feminists more efficiently and build a bigger following.

Natalie Kivell, 31, a University of Miami doctoral student in community well-being, hosts a show on social issues for WVUM 90.5.

“[When] I did a show on feminism, with Susy Patterson, one of the first questions we got was, ‘Are you fat?’” Kivell said. “I thought it was so interesting because as soon as you talk about anything around inequality with women, there is an assumption of who you are, like that you are angry or are the man-hating feminist stereotype.”

Audrey Aradanas, 21, feels more should be done for young women across the state. A former president of Florida International University’s National Organization for Women, she plans to create a podcast called Grrrls UnInterrupted to addresses female issues in South Florida and a blog to collect donations.

“I see my work and what I am doing, and I want [the next generation of women] to know you don’t have to put up with the b.s.,” Aradanas said. “I really want [them] to understand that they are independent and autonomous. That they have the choice to be whoever they want.”