In fall 2013, Susan Jacobson drove to her Miami Beach apartment and parked her four-door Buick LaCrosse outside for a couple of hours.

When she returned, she found her car in half a foot of water. After the same scenario repeated numerous times, Jacobson, who was new to Miami, tried to find out what was causing the problem.

“I got interested,” Jacobson recalled, “because I wanted to know when I would have to move my car.”

For Jacobson, her car’s flooding was a call to action. She, Juliet Pinto, Kate MacMillin and Robert “Ted” Gutsche, Jr., faculty members in Florida International University’s School of Journalism and Mass Communication, came together to create an app to show how much of Miami would be submerged with each incremental rise in sea level.

The app can be found on their website, www.eyesontherise.org, which also includes a student-produced documentary and timely facts on sea level rise.

Jacobson is currently project manager of the app, which has a map where users can adjust water level rise up to six feet. The app also allows users to search an address and see at what water level that location might be submerged.

It uses Google elevation technology to display the elevation of land as it relates to elevation of the water. Jacobson and Pinto say they hope the app will give Miami residents a simple way to visualize water rise.

Jacobson and the Eyes on the Rise team are not alone in their concern over sea level rise. Over the past few decades, flooding caused by sea level rise has increasingly affected South Florida. Even with the current drought, it remains a constant concern for many Miami neighborhoods. 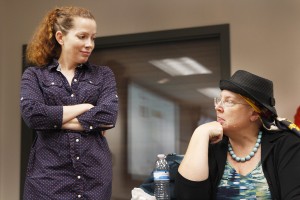 “Ocean levels are increasing because of the ice age,” said Michael McGauley, who teaches physics and earth sciences at Miami Dade College.

Tide gauges, also known as mareographs, record changes in sea level rise. Florida has 1,200 miles of coastline, but they are not Miami’s only source of water concerns. Water is also rising from underneath the ground’s surface.

The reason for this underground rise, scientists say, is Miami’s limestone bedrock, formed when shellfish, coral and fish skeletons are piled together for a long time. Limestone is porous with holes, which allow water to rise into yards and back through drainage systems. As the water rises, the saltwater mixes with the freshwater.

Rising Above the Tides from Trevor Green on Vimeo.

The biggest worry about sea level rise is Florida’s infrastructure. In 2010, this infrastructure was worth $2 trillion and it is expected to be worth about $3 trillion by 2030. As water rise affects Miami, it will ruin homes and buildings causing Miamians to lose money in investments, time and effort. Just buying a home in Miami will take on new significance.

When young people are looking to buy their first homes, they may not realize rising water could affect their potential neighborhoods. That’s because Realtors are not required to tell their customers about the effects.

Marla Martin, media relations and communications manager for Florida Realtors, said there is “no disclosure law for something not known.” She said water level rise would need to be more of a broad issue before realty companies would be required to say anything to their customers.

Although Pinto agrees that it is impossible to know the future, she said climate change is having a direct effect on sea level rise, and her hope is that the app will help the Miami community get involved to save the Everglades and their homes.

The app’s developers are looking to improve its accuracy by including flood reports, tide levels, rainstorms and pumps like those being installed in Miami Beach.

They also want to start a K-12 curriculum to broaden education initiatives and to get future generations involved with what they will one day have to face.

“We are going to better teach our students about climate change,” Pinto said, “because climate change is the biggest issue of our time.”

Jacobson and Pinto say they hope the app will not panic Miamians, but help them come together to address the issue. Ignoring the danger is no longer possible.

“If you’re planning on living here,” Jacobson said, “then the impact is obvious.”

tagged with Stemming the Tide