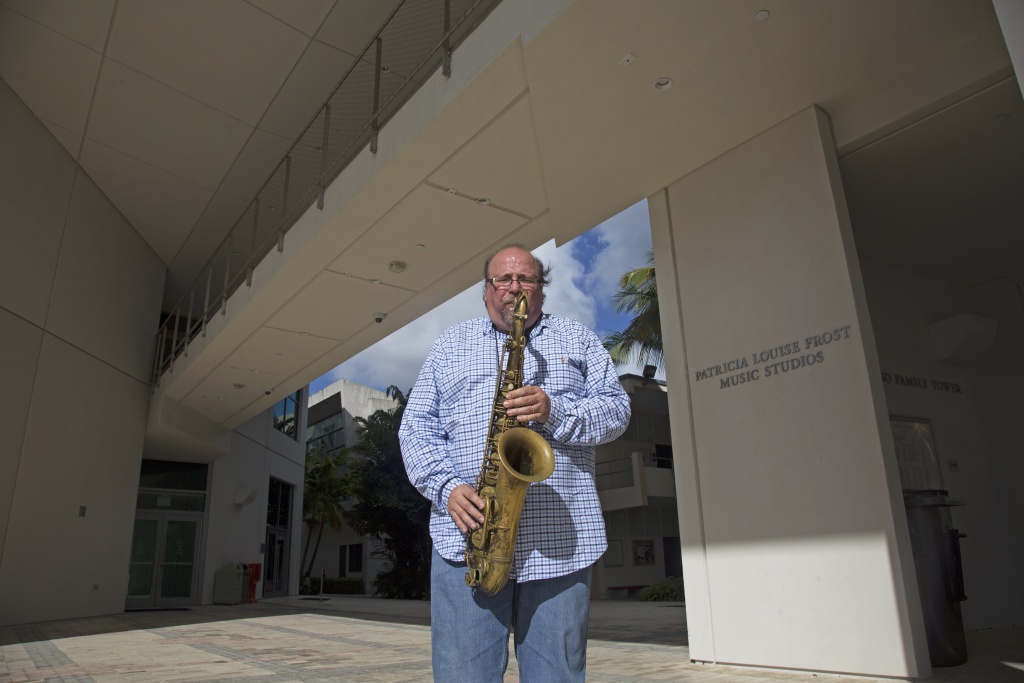 Ed Calle’s saxophone case has been around.

Its handle has been torn off and reattached. It’s beaten from years of gigs.

“I like being thrown into everything,” Calle said. “I think that’s how I am reflective of Miami. Because Miami itself isn’t just one thing.”

Calle’s versatility has translated to worldwide success. Collaborating across musical genres, he works with artists ranging from Vanessa Williams and Rihanna to Jimmy Buffet and Santana.

“Calle is someone who can range from classical to contemporary music,” DeWitt said. “He can excel without losing his voice in other people’s work.”

After moving from Venezuela to the United States in 1966, Calle’s father encouraged him to pursue music. He chose the tenor saxophone and was awarded a scholarship to the University of Miami, where he got serious about a musical career.

“I never practiced during high school,” said Calle, who also serves as chair of the Miami-Dade College Department of Arts and Philosophy. “But once I was in college, I would go from 6:30 in the morning to seven or 11 o’clock at night.”

As a focal point in the Miami scene, Calle seeks to contribute to the success of local artists as well as his students.

Grammy-nominated Robert Rodriguez, a South Florida native, has been exposed to Latin music his whole life. But it was only after working with Calle that his career took a pivotal turn.

“He’s the unsung hero of Miami,” Rodriguez said. “He really got my foot in the door in the music scene. He was generous enough to recommend me to Arturo Sandoval, which helped me collaborate with other great artists.”

“It’s always a big deal when you get asked to be on an album that won a Latin Grammy,” said Brian Quezada, a former student of Calle’s and a featured musician on “Mamblue.”

“It helped me get a few more extra gigs.”

As big-label artists overshadow local musicians, diverse styles such as Afro-Cuban jazz have a tough time winning fans in South Florida. Calle, however, works to keep its diminishing spirit alive.

“There is good music out there, even better than some of the music you hear on the radio,” said Peter Stebbins, owner of Shake 108 radio. “It’s why radio stations need to incorporate local bands to keep Miami’s culture thriving.”

Calle is constantly looking to do exactly that. On “360,” his most recent album, Calle merged Afro-Cuban Jazz with Nashville influences.

“Afro-Cuban music isn’t just Afro-Cuban anymore,” he said. “It really has changed a lot, and I am blessed to say that I am a part of that.”

As for the local perception, Miami jazz musicians like Hana Dolgin believe the fusion of Latin Jazz is more than beneficial — it’s vital.

“Many artists in Miami now have to know different styles,” Dolgin said. “If not, they could not survive.”

Grammys and the approval of peers are enough for most artists. But for Calle, it’s always about breaking new ground.