“Things in Wynwood were torn down,” said Juan Navarro, former employee in his family’s business, Navarro’s Paint & Body Shop, located in Wynwood in the late 1990s. “We had to lock everything so it wouldn’t get stolen. Gentrification in Wynwood was necessary for safety.”

Gentrification, the process of renovating a poor areas into a desirable middle-class community, has been undertaken in many low-income, deteriorating neighborhoods across the United States. Although it can substantially improve the safety and living quality of its new residents, it can also cause property values to increase and a community’s identity to be forgotten.

It started in the 1950s, when Wynwood was known as “Little San Juan,” an affordable, working-class Puerto Rican neighborhood. Two decades later, Wynwood’s population expanded into a multi-ethnic community with high crime rates and poverty levels.

During the 1990s, emerging artists and art dealers took advantage of cheap and vacant warehouses to display their work.

VIDEO: Despite its reputation as an art and entertainment hub, Wynwood’s recent glamorization came with unforeseen consequences. This video explores the effects gentrification has had on its artistic community.

But many say that such efforts to transform a low-income neighborhood have resulted in the removal of the community’s identity, rather than including its residents in the community’s future lifestyle.

“It is turning into an area that’s a lot about the money and not about the people. Artists moved into a poor area, built it, made it popular and are the first ones forced to move out,” Navarro said.

The property value of various houses closer to the art district in Wynwood are also on the rise. Online real estate site Trulia reports median sale prices in Wynwood have risen from $100,000 in 2000 to more than $300,000 in 2016. 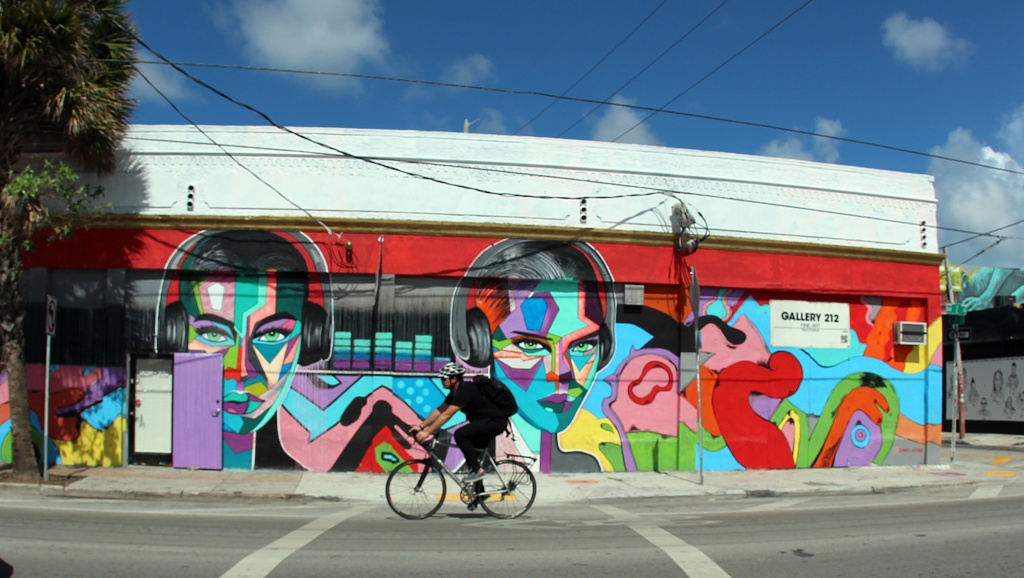 NEIGHBORHOOD ART: A bicyclist rides by “Gallery 212,” one of the many art galleries in Miami’s Wynwood neighborhood. (Photo by Christopher Vazquez)

As the property values continued to rise and the neighborhood drifted away from its original art culture, long-standing artists also opted out of Wynwood. The neighborhood they once used as an outlet to display their art was transformed into an unattainable, and for some, uncomfortable location.

“There was something wonderful about Wynwood,” said Steinbaum. “It wasn’t all fancy high rises or expensive restaurants. Artists could afford to live there, and now they can’t.”

Now, Steinbaum feels that the presence of artists is based more on the ability to pay rent rather than skill level. Many other artists, such as Hec One Love, echoed similar sentiments. Most visitors stroll through Wynwood for the Instagram worthy pictures but fail to appreciate the art itself.

“It’s not about the art anymore, it’s about the selfie,” said Hec One Love. “It tells a lot about the generation.”

In 2014, former college students Camila Alvarez of Florida International University and Natalie Edgar of the University of Miami released the documentary “Right to Wynwood.”  It captured the perspective of lower-income residents on the gentrification of their community and provided an insight into the minds of those property owners.

“It was heartbreaking coming to the realization that all these people had their homes taken away,” Edgar said.

Although Wynwood continues to grow as one the most popular neighborhoods to visit in Miami, it is rapidly evolving from the original artistic intention of the community and leaning towards a money-driven entertainment hub.

“It’s probably going to be worse in the long-run,” said Hec One Love. “It will be another playground for the privileged.”