Horses, aromas, soccer and other alternative therapies offer hope for the autistic

Amongst the banyan and oak trees of Miami’s Kendale Lakes, plastic rings dangle from the ears of a horse, hoops and large letters decorate the riding arena, and children and seniors both come by for a weekly ride.

“Several parents tell me that the only time they ever see their child sit still is when they’re sitting on a horse,” said Robin Bramson, the head riding instructor and program director of Whispering Manes Therapeutic Riding Center. 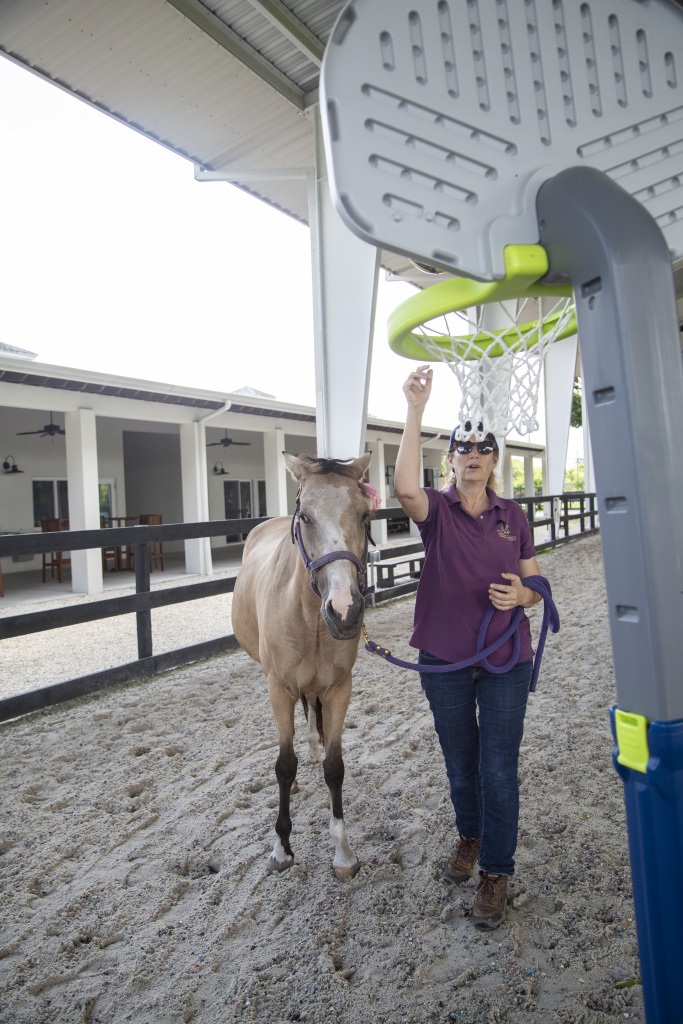 Robin Bramson demonstrates a therapy exercise with Cinnamon, one of the horses used in the sessions with participants. (Photo by: Kennedy McKinney)

Bramson taught the first riding lesson at Whispering Manes when it opened six years ago. Unlike other equestrian programs, Bramson’s offers lessons designed exclusively for those with cognitive, emotional and physical disabilities.

Servicing 50 to 70 people a week, half of Whispering Mane’s regular participants are diagnosed with autism spectrum disorder, a diagnosis that has been increasing steadily over the last 20 years, according to the Centers for Disease Control and Prevention.

In 2014, the most recent year statistics are available, autism affected one in every 59 children in the United States, the CDC reported. That number is a 15 percent increase from the number of diagnoses two years earlier.

As part of Whispering Manes’ program, riders have the chance to groom, work and participate in activities with horses. One exercise Bramson introduces is reaching over to a ring stand and placing a hoop on the horse’s ear.

Another involves sitting on the horse and shooting a basketball. Large posters of letters are positioned in the arena, not only to break down the steps of riding and maneuvering the horse, but also as cues to start speech activities.

“For every potential challenge someone may be experiencing, being on the horse or around the horse can help them address that,” Bramson said. “[It] expands their world a lot.”

Autism is often characterized by sensory-seeking behaviors, which can manifest in “hand flapping” and other repetitive motions. The horse has a lot to offer in terms of sensory input, which can have a relaxing effect on riders.

With three dimensions of motion, including bilateral, side-to-side and front-to-back movement, the rythm of a horse is also thought to stimulate the verbal center of the brain, a particularly helpful aspect for those on the spectrum with minimal verbal language.

One of the participants Bramson worked with previously went from refusing to receive instruction to winning a gold medal at the Florida Special Olympics.

“When they’re around the animal, they’re able to connect with the animal, and they have that warm feeling between the animal and them,” Autism Connections manager Bellkiss Vigil said. “Once the child connects, it seems like the child opens up a little bit more to people.”

Although similar to hippotherapy, another kind of horse-assisted therapy, Whispering Mane’s riding program stresses riding goals first. Where hippotherapy might conclude once a specific health target is met, participants at Whispering Manes can continue to incorporate horseback riding as an activity in their lives.

Traditional forms of therapy continue to play an important role in autism treatment, but alternative options are springing up all over South Florida.

STARS Autism School incorporates aromatherapy and yoga into their instruction. Autism Soccer, headquartered in Miami, offers structured play for children to develop communication and behavioral skills. And Empower Farms affords its visitors a chance to become involved in sustainable farming practices in Homestead.

“It’s always just enjoyable for people to get out,” Bramson said. “They might want to still come and participate in the program so that they have something to look forward to.”

Before being added to the program, Whispering Manes horses, which average between 13 and 15 years old, must be screened and specially trained.

“The horses, they don’t judge,” said Sarah Merril, a certification representative of PATH, an organization which Whispering Manes is accredited through.”They accept you for who you are.”

Bramson has seen her share of reluctant riders. From distress at wearing a helmet, to uneasiness around large animals, Bramson works with each participant to take that first ride.

“We haven’t turned anybody away, even people who are uncomfortable,” Bramson said. “I have a variety of techniques to try to get them to just try it. Once they’re on, then they’re sold.”