As football teams around South Florida schools gear up for another season, they will be doing so once again with less of a key piece of equipment: their helmets.

As research on football-related sports injuries continues to grow, one of the more groundbreaking health issues has been the effects that head injuries can have on players —even long past their playing days.

Initially acknowledged in 2009 by the NFL as a possible effect of playing football, chronic traumatic encephalopathy, or CTE, has raised eyebrows of football players and parents across the country.

For Pop Warner, it’s been about limiting injuries whenever possible. The organization in 2016 became the first football program for any age group to eradicate kickoffs and punts.

“A lot of times [kickoffs and punts can cause] head or upper body injuries,” said Allen, who believes other football programs across the country are soon to follow.

When one suffers a concussion, it can lead to headaches and temporary memory loss. Concussions have been linked to CTE, which closely relates to brain degeneration.

The disease can only be diagnosed after death, but its effects during life can include short-term memory loss, depression and emotional instability. CTE can also cause suicidal thoughts and behaviors.

Two of the most extreme cases of CTE caused Pro Football Hall of Fame linebacker Junior Seau and convicted murderer and former NFL player Aaron Hernandez to kill themselves.

Nationwide, the number of participants in football in 2016 and 2017 was 1.1 million, down 25,503 from the previous season, according to the annual High School Athletics Participation Survey conducted by the National Federation of State High School Associations.

In 2016, the FHSAA restricted live contact practices during the preseason and spring to 40 minutes per day. Practices during the season are limited to 30 minutes a day and 80 per week. In 2015 Florida also became the first state to require high school athletes to complete courses on concussions before they are allowed to compete in high school sports.

A 2018 study by Brain, a neurology journal, showed that repeated blows to the head, whether resulting in concussions or not, could result in chronic brain damage.

Christopher Columbus High School, one of the top high schools in South Florida for football, has taken numerous steps to prioritize player safety.

Head Coach Christopher Merritt serves as regional manager for USA Football, which is affiliated with Heads Up Football, a player safety program. Columbus High School was one of the first 30 high schools in the nation to become certified by the Heads Up program.

“Our program at Columbus implemented both Heads Up tackling and Tip of the Spear blocking,” Columbus High School defensive line coach Pete Marti said in an email interview. 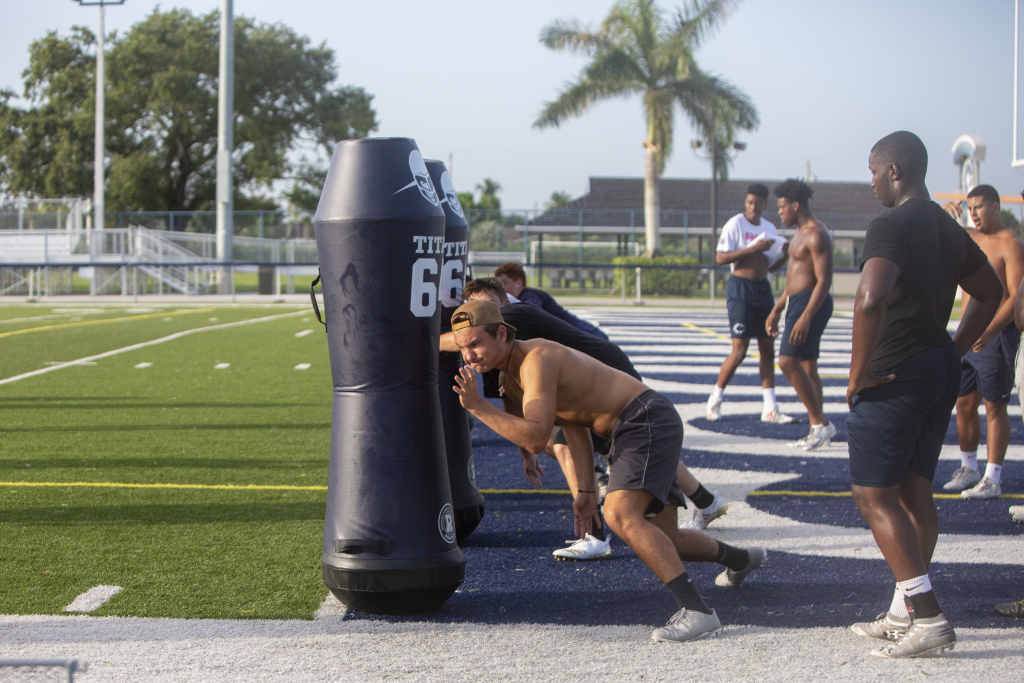 “Both of these initiatives serve to reduce concussions by applying techniques that specifically keep the head out of the action.”

When Merritt first arrived as head coach, there were some days with three practices. Now the team does not have more than one a day.

The coach said head injuries used to be referred to as just “getting your bell rung” and that it “showed you were tough.” But Merritt’s focus now is all about taking the player out of the game when concussions or other head injuries may arise.

“There can still be hard hits, just with safer technique,” Marti said. “Being smart and being tough are not mutually exclusive.”

Since these changes, Columbus High School has seen a drop in concussion rates.

It isn’t just the mentality of coaches and players that has changed. Medical diagnoses of head injuries have become more sophisticated as well.

“When I came [to Columbus] five years ago, there was one code [diagnosis] for a concussion,” said Merritt. “Now there are 30.”

University of Miami running back Robert Burns has personally seen a change in hits over both his high school and college football career. And he said the changes are for the better.

Hits with the crown of the helmet were once a staple in the game. Now, not only is it something discouraged by coaches, but forbidden at the collegiate level through the “targeting” rule. The topic is a controversial one in college football.

“You hear, ‘Just let them play,'” said Burns. “[But] you’re worried about the safety of players.”