Teen health going up in a puff of smoke

Sammi Lawrence remembers going into the bathroom with her friends and seeing them pull out their Juuls. They offered her a hit that triggered an uncontrollable cough, the smoke burning her throat.

Little did she know she would soon be addicted to that burn.

“It’s for sure an addiction. I’ve tried and tried to stop but it’s not possible,” said the 17-year-old high school senior at Coral Glades High School. 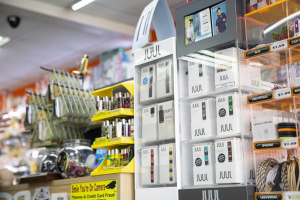 Merchandise for sale at Vape and Smoke shop in Coral Gables. (Photo by: Steven Lee)

An alternative way of smoking, the highly addictive e-cigarette, ‘Juul,’ has become widely used by teenagers since its release in 2015.

Teens under 18, prohibited by law from buying and using Juuls, have started inhaling from this nicotine and chemical-filled smoke device without being aware of the potential health risks.

The high amounts of nicotine in the Juul products compared to cigarettes are causing teens as young as 11 to become highly addicted.

“It takes me about three days to get through a Juul pod,” said Lawrence, referring to the cartridge that holds the vape juice containing nicotine.

In one week, she goes through about two pods — or the equivalent of smoking more than two packs of cigarettes a week.

“The Juul is the product in our store that contains the highest amount of nicotine,” said Elena Carmona, who works at Vape and Smoke shop in Coral Gables. The high amounts of nicotine in the Juul make the chances of addiction much greater.

Each Juul device kit costs about $35 and a pack of four pods is about $16.

Lawrence has Juuled for a year, with her addiction developing only three months after she started.

“I think a lot of kids do it because everyone’s using it right now,” she said. “It’s all about getting onto the trend.”

According to the advocacy group Campaign for Tobacco-Free Kids, more than 2.1 million teens were using e-cigarettes last year, and an estimated 3 million are using today, according to the American Academy of Pediatrics.

A six-minute video released by Juulers Against Juul and posted on the ABC News website included interviews with teen Juulers such as Jack Solomon, a 15-year-old Juuler at Scarsdale High School in New York.

“I think that kids leaving school desperately needing pods happens a lot,” Solomon said in the video. “And it shouldn’t happen, but kids are very addicted to these e-cigarettes and need this stuff to be satisfied.”

According to a 2018 Surgeon General Report, “E-cigarette Use Among Youth and Young Adults,” Juuls contain many harmful ingredients besides nicotine, including diacetyl, a chemical linked to serious lung disease, heavy metals like lead, and microscopic particles that can get deep into your lungs.

“We are strongly against minors vaping. The rates are increasing and it is becoming extremely accessible to them,” said Lindsey Rosegger, development manager at the American Lung Association in Tampa. “People also don’t realize how bad it is to put this smoke into your lungs; in the future, it can cause popcorn lungs.”

The e-cigarettes are easy to hide from parents because they are small and closely resemble a USB drive. As a result, students use them between classes or in bathrooms.

“Every school in this country is dealing with this issue,” said David Pugh, Christopher Columbus High School principal. “It is a national epidemic from elementary to high school.”

“We had a guest speaker come in,” Pugh said. “He showed slides of sores on the lips, tongue, and mouth. It’s almost like a meth addict when their gums start to recede.”

Marketing agencies have begun targeting teens and they have been successful.

The National Institute on Drug Abuse reports that 56 percent of high school students are exposed to retail ads on e-cigarettes, 43 percent to internet ads, 38 percent to TV and movie ads, and 35 percent to newspaper and magazine ads.

Juul pods have a variety of flavors such as fruit medley and cool mint that make using their product more appealing. In a new study by Truth Initiative, the nation’s largest non-profit anti-tobacco public health organization, 63 percent of Juul users were not aware the product contained nicotine.

Many users under 18 ask adults to buy Juuls and pods for them, while others attempt to buy from places known not to ID.

“On a regular basis, I get about four to five underage kids during my shift trying to purchase Juul pods,” Carmona said. “Today alone, I had five kids come in before 10:30 a.m.”

Lawrence had an easy time buying hers.

“I got my Juul by just walking into a smoke shop and buying the Juul,” she said. “I was only 16, and they did not question me. I continue to go to that shop to buy pods and have never been asked for an ID.”

According to Harvard Medical School, of 51 percent of e-cigarette brands tested, 92 percent carried at least one cancer-causing chemical. And, according to the Surgeon General, nicotine exposure during adolescence and young adulthood can cause addiction and stymie brain development.

“A teenager [who] starts their experience with smoking with a Juul is insane,” Carmona said. “One pod of a Juul is a pack of cigarettes, and they’re smoking that on a daily basis. How much are they gonna need when they’re older?”

According to Science News for Students, smokers under 18 who start smoking for the first time with the Juul are more likely to start smoking cigarettes later on. 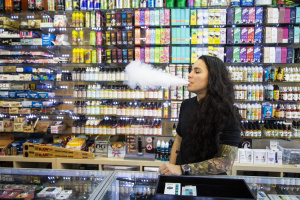 Juuling has become such an issue that the Florida Constitution Revision Commission is in the process of banning vaping in public due to the harmful effects of its second hand smoke.

Despite knowing the health risks, Lawrence continues to smoke.

“I am aware of the health ramifications that come from Juuling,” she said. “I think about it all the time. But I know I am not going to be doing it my entire life, so I am not really concerned about it. I know it’s bad, but everyone does it.”