Counselor Tomás Monzón shows workshoppers Keilah Angueira and Marlowe Starling how to adjust a camera in preparation for a photo assignment. (Photo by Montage staff)

Walking into the University of Miami communication school for the first time, Marlowe Starling saw 19 unfamiliar faces. Barely believing she finally made it into the Miami Montage workshop, she took a seat and waited.

“It was a little surreal just because it finally hit me that I was gonna be staying here for three weeks,” she said. “It was a very long day. It was a day that felt a week long, but nonetheless I felt comfortable by the end of the day with everybody.”

For many, the workshop only becomes more exciting as time passes.

“It was amazing,” said Sarah Harder, a former Miami Montage student who has since returned to the workshop as a counselor. “It was terrifying and stressful, and yet it was some of the best fun I ever had. My writing skills and reporting skills really grew during that time.”

Now in its 33rd year, the Peace Sullivan/James Ansin High School Workshop in Journalism and New Media invited 20 student journalists to the university, where they honed their skills in writing, reporting, photography and video production.

The program is sponsored by the Dow Jones News Fund, the Miami Foundation, WSVN-Channel 7 general manager James Ansin and retired journalist Peace Sullivan. The three-week workshop culminates in the publication of the annual Miami Montage newspaper. 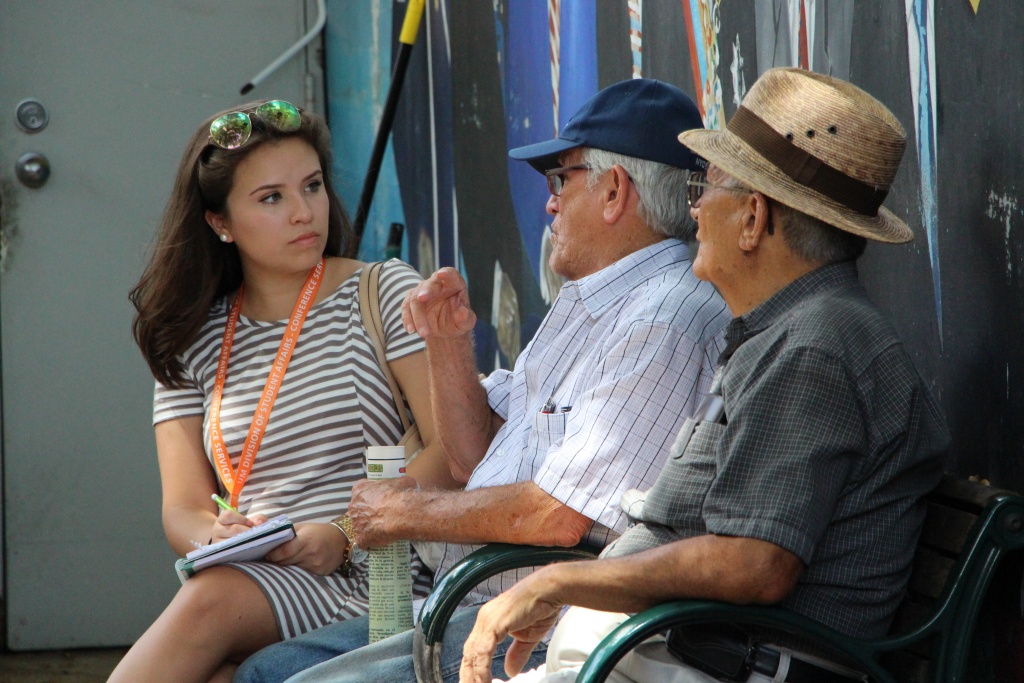 Nicole Via y Rada seeks sources for her story on Cuban immigrants. (Photo by Montage staff)

Since the first issue in 1984, the workshop has expanded from a one-week camp to an intensive, three-week long residential program. In 2008, Fred Blevens, professor of journalism at Florida International University, joined the workshop, with University of Miami department chair and UM associate professor Sam Terilli, chair of the Department of Journalism and Media Management, joining him in 2011.

After leading a journalism workshop at FIU, the veteran newspaper editor found himself searching for a more advanced environment. Montage 2016 marks his 46th workshop covering three states and universities

“I don’t know of any high school around here producing these kinds of stories at this level,” he said. “I don’t see how you can come out of this workshop and just not know a ton more than you knew when you came in.”

VIDEO: The process of the Miami Montage 2016 news magazine.

“This program really made me learn how to communicate and reach out,” he said. “You have to call 10 people for one person to say ‘yes.’ It just gives you that experience to learn so much more than I knew when I got into the program.”

This year, workshop participants chose the theme South Florida identity, reporting on the diverse people, communities and industries that shape it.

“I was thrilled by it,” Starling said. “[South Florida] was so different before than it is now, and it’s still changing. And I think that’s a wonderful thing but something that people should know about. I think a lot of locals here aren’t too aware of those changes, and they should be.”

Blevens was just as excited.

“It’s such an iconic city in so many ways,” he said. “There are symbols and images of Miami and Miami Beach that are just amazing. So when that started developing at that brainstorming session, I was extremely pleased. It’s not an easy subject, but it’s a doable one.”

Students are also exposed to professional journalism with visits to the Miami New Times and to WSVN-Channel 7, the local Fox affiliate.

“I think it’s really valuable because I think it opens some eyes to what really goes on,” Blevens said.

While Miami Montage students may one day fill newsrooms like these, Harder believes the workshop will benefit participants outside the world of journalism.

“I hope it shows them what’s out there in the world and just the sense of accomplishment that comes with finishing this program,” she said. “I hope they remember that, and they find whatever it is in life that will give that feeling to them.”