On a typical day at the local LA Fitness in Miami, people are lifting weights, doing yoga exercises and running on a treadmill. But something is unusual about this gym — most people here are over the age of 65. 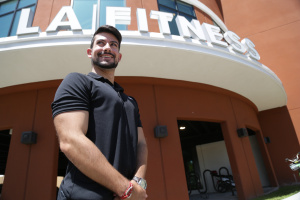 Alex Guzman, outside the LA Fitness where he works as a personal trainer. (Photo by Joseph Fernandez)

“There are currently more seniors in the facility than the youth, and the high number of older people give this LA Fitness significantly more traffic,” said Alex Guzman, a personal trainer at LA Fitness.

Miami has become a city where seniors stay fit and healthy. Nationally, 38.9 percent of people over the age of 65 are obese. But Miami’s obesity rate is significantly lower, with only 15.1 percent of seniors being considered overweight.

One contributing factor may be government programs, such as Silver Sneakers, along with other factors, such as culture and climate.

The Silver Sneakers Program is an initiative created in 1992 to encourage elderly people to exercise by allowing free memberships to partnered gyms through Medicare Advantage plans, a gap insurance policy with a focus on preventative wellness.

Miami has 228 Silver Sneakers partner gyms, almost as many as New York City, which has double the population of senior citizens.

Alex Guzman said activity can stave off all manner of health problems. 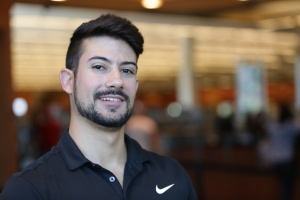 Alex Guzman, inside the gym. (Photo by Joseph Fernandez)

“Exercise assists in keeping bones, muscles and heart strong, and with older people exercising more, complications such as arthritis, diabetes and other medical problems can easily be reduced,” he said.

Many senior citizens believe the program contributes to all elements of their wellness.

“The main benefit is the gyms are free, and that motivated me to go work out. The program has helped me physically, mentally and emotionally,” said 73-year-old Luisa Gralv, a participant in the Silver Sneakers Program.

“What’s so great about the medicare advantage plans for the elderly is that they are proactive instead of reactive, and that, in the long run, allows seniors to not have to go to the hospital and have to pay for reactive treatment,” said Greg Hartley, president of the Academy of Geriatric Physical Therapy and assistant professor of clinical physical therapy in the University of Miami Miller School of Medicine’s Department of Physical Therapy.

The Silver Sneakers program does encourage elderly people to exercise, but seniors who are not enrolled in Medicare Advantage don’t have access to the program.

“Medicare Advantage programs that do provide Silver Sneakers and other benefits tend to be much more expensive than basic Medicare, and there needs to be more accessibility for some incremental effect to happen,” said Neva Kirk-Sanchez, an associate professor in the Miller School.

Instead of using Silver Sneakers, some Miami seniors pay for preventative health measures out of their own wallets.

Because of their proactive actions and changes in their diet, the couple have become healthier overall. Chester can now lift more than five pounds, and Maria is strong enough to swim again.

Juan Suarez Rivas, a 75-year-old Cuban, works out at the University of Miami’s wellness center, where, as an alumnus, he receives a substantial discount. Rivas said he has exercised his whole life and thinks it saved his life. 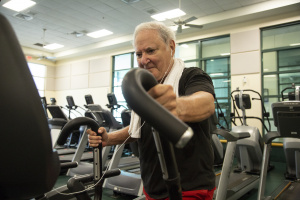 Juan Suarez Rivas working out at the University of Miami’s Wellness Center. (Photo by Joseph Fernandez)

While exercising a few years ago, he felt strange and went to the doctor. It turned out that there was a problem in the left ventricle of his heart (called the widow maker).

“If I hadn’t been exercising, I could’ve had a heart attack, and I could’ve died,” he said.

Whatever their reason for getting fit, Miami seniors are ahead of much of the country in terms of health.

“Miami is definitely a place to study in terms of what got (the city) to be so healthy,” Hartley said.

He believes that more people around the country need access to preventative programs.

“There are other places throughout the state and country that are impoverished and cannot afford Medicare Advantage. But if the government helps with accessibility, there can be some change,” said Hartley.

Kirk-Sanchez, the chair of the UM’s Department of Physical Therapy, agrees.

“Miami has a great situation, but barriers are different everywhere. It can be climate, cultural, or anything else, but the best we can do is speak to (our) communities.”