Joan Price never quite understood why senior citizens and sex are seen as opposites.

“I fell in love when I was 67 with a man who was 64, and we were having such amazing, exhilarating sex that I didn’t understand why it was such a secret,” Price said.

Her experience led her to write a book called “The Ultimate Guide to Sex After Fifty,” and to start encouraging senior citizens to get more comfortable talking about their sex lives.

Advocates like Price are becoming increasingly necessary. As baby boomers mature into a growing population of senior citizens, many of them are engaging in unprotected sex, which has led to a rise in sexually transmitted diseases (STDs).

People over 65 are now the fastest-growing age bracket for STD diagnoses in the United States. And the problem is especially pronounced in the greater Miami area.

Both Broward and Miami-Dade County have more cases of STDs among senior citizens than 63 of Florida’s other counties combined, according to the Florida Department of Health.

Pepper Schwartz, a sociologist and sexologist at the University of Washington, attributes this STD increase to seniors’ longer life spans and the introduction of dating websites and apps. 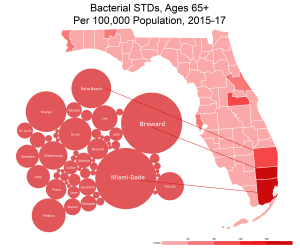 (Check out an interactive map at the end of the article!)

She also said medications that directly or indirectly influence sexual behavior, such as erectile dysfunction medications like Viagra for men and estrogen supplements for women are factors.

Because seniors are past reproductive age and the risk of unwanted pregnancy is no longer an issue, they mistakenly believe that using condoms is no longer necessary. This belief is so widespread that men in their 50s are six times less likely to use condoms than men in their 20s, according to a study conducted by Massachusetts General Hospital in Boston.

Some experts say this trend is due to a fractured line of communication between doctors and their patients, while others point to a conspicuous cultural difference between the baby boomer generation and their successors.

But the biggest problem may be connected to Price’s complaint: a stigma against talking about people over 60 having sex.

“We have preconceived ideas that this population isn’t sexually active,” said Greg Hartley, president of the Academy of Geriatric Physical Therapy. “The myth of aging adults not participating in sexual activity later in life is just that: a myth.”

Experts say that healthcare professionals are not trained rigorously enough to precisely answer elders’ sexual health questions and, on top of that, gynecologists who focus on the elderly are in extremely short supply.

“Miami and Florida have a huge lack of healthcare,” said Mayte Canino, the program manager for Planned Parenthood of South, East, and North Florida. “We see a lot of older patients in our centers just because there aren’t that many gynecologists in the Medicare plan to choose from.”

With a limited number of doctors focused on primary health matters for Medicare recipients, there are only a few organizations providing sexual health resources for seniors in Miami.

One such resource is Test Miami, an HIV testing center that offers innovative medicines that help combat HIV. Doctors don’t talk about HIV with people over 65, said Germa Dubuisson and Hermi Molina, co-supervisors of Senior Human Services at Test Miami.

“They should include HIV in their regular routine…but they don’t,” Dubuisson said. Instead, seniors have to learn to talk about sex with their doctors.

“So many people grew up at a time where it was very hard to talk about sex,” she said. “We should not be written off because there’s some artificial age or expiration date (for our) sex lives.”