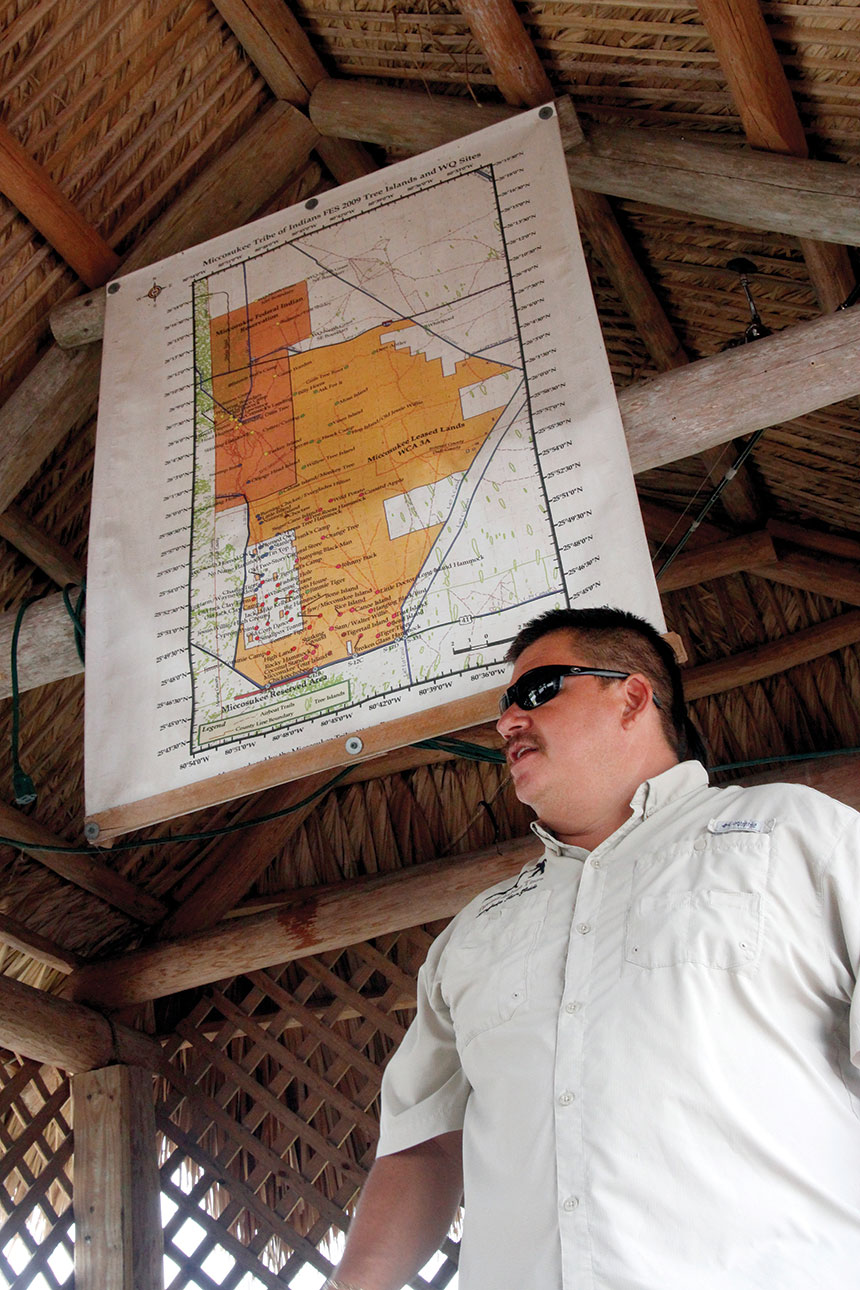 John Tigertail, owner of Tigertails Airboat Tours, says the future is bright for the Miccosukee tribe, one of the smallest indigenous populations in the United States. (Photo by Jessica Koernig)

For nearly 200 years, the Florida Everglades has been home to the Miccosukee tribe.

Over that period, the tribe has adapted for survival, evolving from hunters and gatherers to enterprising entrepreneurs of organized tourism.

That change started in the 1940s, as tribe members began to realize they could not solely live off the land. Today, the population of 589 is among the smallest of all indigenous peoples.

The midcentury shift also was facilitated by road building that connected the Everglades and the Miccosukee to a suburban population.

The tourism industry in South Florida began to grow, presenting the native tribe with the fortuity to share their culture with outsiders, as well as make a decent living.

In 1999, the tribe opened the Miccosukee Resort and Gaming facility to the public at a cost of approximately $45 million. Casino revenue is distributed among the tribe members and used to raise tribal history awareness.

“Thousands of people throughout the world discover Native America through the marketing, coordination, and financing skills of the Miccosukee,” said Dennis Wiedman, professor in the Department of Global and Sociocultural Studies of Florida International University.

The tribal members who live in the Everglades today descended from roughly 200 Seminoles who refused to move west during the Third Seminole War.

A 2014 report by the  Bureau of Indian Affairs compared the minuscule when compared with other tribes. The Navajo Nation has 194,563 members, and the Seminole Tribe of Florida is at 3,680.

Keeping a stable population has always been a struggle for the tribe. Prior to industrialization, the Everglades’ vast ecosystem ran wild, serving as the perfect hiding place for anyone wishing to live a life connected to nature.

Cypress wood and cabbage palm chickees built on islets around the Everglades once housed families like the Tigertails for many years. Those have now been repurposed to please the tourist eye. Displays ranging from the totem poles of other tribes to massive turtle shells are artifacts attesting to what used to be.

Tribal businesses that now operate out of the Everglades area are being passed down to younger generations.

Within the tribe, more and more indigenous parents are sending their children to school. In Florida, the compulsory education law states children ages 6 to 16 must attend school. However, this law does not apply to the Miccosukee and other tribes across the nation due to their self-governing status.

“My grandpa would tell me to stay in school,” said John Osceola, a 38-year old elderly care worker at the Miccosukee reservation.

Schools on the reservation place an additional emphasis on cultural studies in order to keep the youth connected to their roots.

The Miccosukee tribe has a rich history and flourishing relationship with the Everglades ecosystem. Although industrialization and suburban population growth have altered aspects of the culture, this inherent oneness with nature will be passed down for years to come.

John Tigertail, owner of Tigertail Airboat Tours, said optimism will prevail in the face of adversity.

“During our ceremonies, there’s a lot of young ones out there, really participating, so it gives you a lot of hope,” John Tigertail said.