Rap music is the new rock.

So much so that the Nielsen 2017 U.S. Music Year-End Report showed that for the first time, R&B/hip-hop (rap) surpassed rock as the No. 1 music genre, with 24.5 percent of consumption.

Rappers therefore have a bigger megaphone to address any issue they deem important, be that promoting a ceaseless party lifestyle, speaking to the nasty truths of drug addiction or discussing issues of mental health.

“As an artist, you’re a leader whether you want to be one or not,” said Miami rapper Southside P. “As a leader, it only makes sense to bring your followers to the light.”

Mental health has been a rap subject since the 1990s. Biggie Smalls’ “Suicidal Thoughts,” Tupac’s “Thugz Mansion,” and Eminem’s “If I Had,” all touched on depression and other mental health issues.

After the “1-800-273-8255” music video was released, Dr. John Draper, director of the National Suicide Prevention Hotline, said that calls rose between 30 and 50 percent.

Mental health raps in 2018 have come from a variety of perspectives. Lil Pump, an area rapper with an international following, celebrates drug use in his raps “Drug Addict” and “ESSKEETIT.” Conversely, perennial chart-topper Kanye West confesses to his struggles with suicidal thoughts, bi-polar disorder and opioid addiction on his seventh solo album “ye.”

Southside P and his fellow Miami rapper King Hoodie, fall on the reflective end of this spectrum. Southside P uses his own traumatic experience to inform his work.

“In December 2017, I got into a severe freak car accident where I witnessed a mother of two lose her life in a horrific way,” said Southside P. “Witnessing and being a part of that accident really took my appreciation for life to the next level.”

Southside P used his songwriting as a form of therapy. Processing the car accident with his music helped him find emotional balance and create an emotional bond with his fans. Southside P found he served as a musical therapist for many fans.

“A few years ago, I released a song called ‘I Gotta Make It,’ and it inspired many of my supporters to follow their dreams,” he said. “One person that contacted me after listening to the song said I inspired her to pursue a nonprofit organization that provides help for at-risk teen girls.” 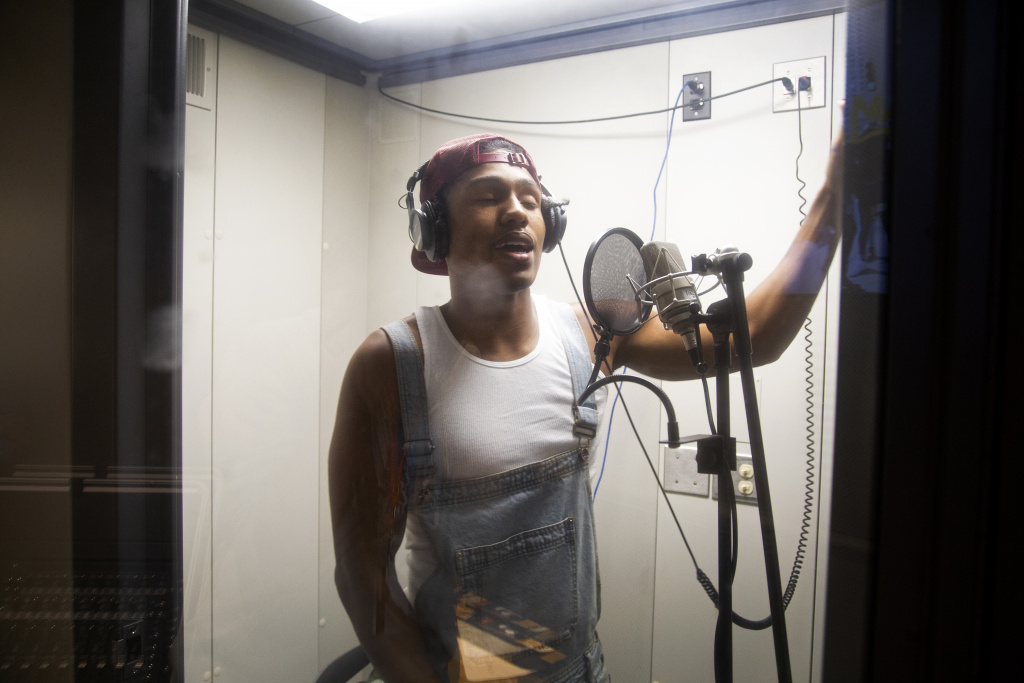 King Hoodie raps one of his latest singles in a recording studio at the University of Miami.     (Photo by Isaac Grossman)

King Hoodie wrote his first raps in a journal his sister gave him after he was expelled from North Miami Beach Senior High. His sister gave him the journal to document his feelings, but he found rap to be a more therapeutic form of expression.

King Hoodie has since released several albums, singles, EP’s and freestyles, and amassed 12,700 followers on Instagram as “King Hoodie.”

“I want my music to force people into a creative life,” he said. “Whatever the case may be, I want to bring out the inner talent in those who don’t believe their creativity is worth sharing.”

Like Southside P., King Hoodie serves as a therapist of sorts to his followers, but one who sometimes makes custom remedies for fans.

“My song ‘My Brother’ was written for a friend of mine that struggles with depression and suicidal thoughts,”  King Hoodie said. “He likes the way it sounds and appreciates it. He even posted a video of himself enjoying the song on his Instagram.”