South Florida seniors in jeopardy as doctor shortage rages on

About a decade ago, a frustrated Derek DuBois met up with former medical school classmates at a New York bar. They were fed up with the medical profession and decided to do something constructive about it.

“Some people decide early that they are motivated to do something different than traditional practice or research,” said DuBois, co-founder and president of DOCjobs.com, a website for people who have left or are considering leaving the medical profession.

Like DuBois, thousands are leaving medicine in droves, which is contributing to a shortage of medical professionals across the nation, especially in South Florida.

A 2017 Florida Center for Nursing report revealed there were approximately 12,000 nurse vacancies in Florida. In addition, a report by the Association of American Medical Colleges also predicted a shortage of 90,000 doctors and physicians nationwide by 2025, and nearly 7,000 in Florida.

“Floridians in many parts of the state will have serious trouble getting the care they need because there won’t be enough specialists in the community available to treat them,” said Ron Bartlett, managing editor of the Safety Net Hospital Alliance of Florida.

Despite this issue, nursing schools rejected about 56,000 qualified applicants from undergraduate nursing programs, according to the American Association of Colleges of Nursing.

In response to the shortage, hospitals such as Boca Raton Regional Hospital, Baptist Health South Florida and Adventist Health System are offering bonuses to nurses who sign up.

Due to these shortages, physicians are shouldering a much bigger workload and are suffering from burnout, depression and lawsuits. DuBois said that this causes many medical students to pursue another career.

A Stanford University School of Medicine survey this year found that 55 percent of doctors experienced symptoms of burnout and 33 percent had high levels of fatigue. In 2017, 6.5 percent of doctors had thoughts of killing themselves, whereas less than 4 percent of Americans consider suicide, according to the 2013 National Survey on Drug Use and Health.

“The major drivers of the nursing shortage include an increasing demand for nursing services by a rapidly aging population, student enrollment limitations at schools of nursing, and an aging nursing workforce,” said Robert Rosseter, chief communications officer with the American Association of Colleges of Nursing.

Many factors in the career of a physician, such as medical school costs, debt and the process of finding a residency, persuade professionals to leave the field.

The typical medical student often spends 11 to 15 years in medical school. Each of the first four years cost students an average of $34,592 for in-state tuition and $58,668 for out-of-state, according to Kaplan Inc., a for-profit educational service. That does not include the additional costs of books and other supplies. As tuition increases, so do student loans, creating debt that takes years to pay back.

“I’m currently still paying for [medical school debt],” said pediatrician Alina Siblesz-Ruiz. “However, I am one of the lucky ones in my era where they really lowered the interest rate. I have about $300,000 debt that I will finish paying off in eight years.” 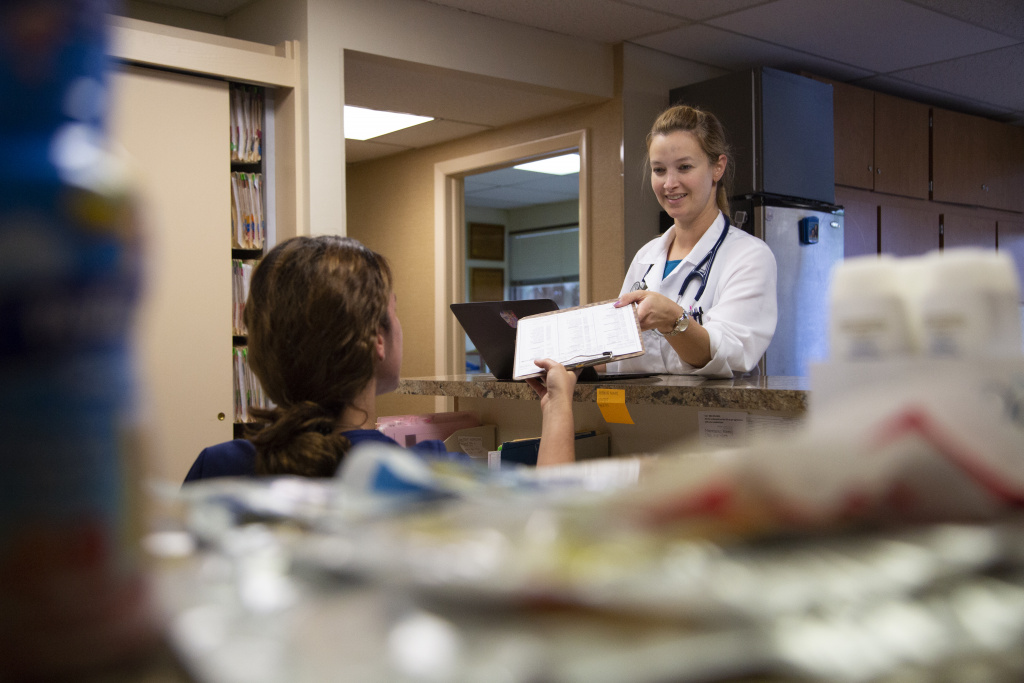 The average med student’s debt builds up to about $167,000, according to a survey by personal finance site NerdWallet. The average medical healthcare professional makes $189,000 a year, according to the Bureau of Labor Statistics. Therefore, even with a physician’s wages, it takes about 30 years to pay off debt that resulted from going to medical school, according to MoneyWatch.

Although there has been a 29 percent increase in medical school residency slots in Florida since 2013, there is insufficient space for every incoming professional. Under such conditions, medical professionals who could help alleviate the shortage in South Florida are being forced to relocate elsewhere.

To help increase the number of residencies even more, the Safety Net Hospital Alliance of Florida requested an additional $2 million in funding for Medicaid regions in 2018.

This would provide Southwest Florida hospitals a $100,000 bonus for each resident in primary care. Additionally, the alliance requested $50 million to help 13 of Florida’s teaching hospitals recover from financial losses that resulted from charity care.

Although funding has been requested, there is still an issue with the population of physicians. As the shortage continues, current physicians will grow old and eventually retire.

The AMN study reported that about 30 percent of the physician workforce in Florida is at least 60 years old, compared to 27.6 percent in the whole country, says a study done by AMN Healthcare Services Inc.

“Florida’s physician workforce is aging,” Bartlett said. “Many physicians are at or are nearing retirement age.”

As physicians increasingly age, they pose a threat to patients as performance is affected. According to the National Center for Biotechnology Information (NCBI), research has shown that 20 percent of cognitive ability declines between the ages of 40 and 75. Additionally, significant variability has been observed from one person to another.

“The problem of physician shortages in America is a very real one,” said pediatrician-in-training Yanet Ravelo. “If there are not enough physicians available to care for these patients, it can result in patient neglect and long wait times that interfere with management.”