Stress is chief trigger for suicide in young and old

When thinking back to the day he almost died, Lukas Paredes remembers it as if it were a dream.

The 17-year-old sat on the side of a bridge, looking over oncoming traffic, and thinking about jumping. After two hours, someone finally helped him.

“Life just felt unfulfilling,” Paredes said. “Some days the thoughts get extremely hard to deal with. I wasn’t thinking about my family or my friends or what I was leaving behind.” 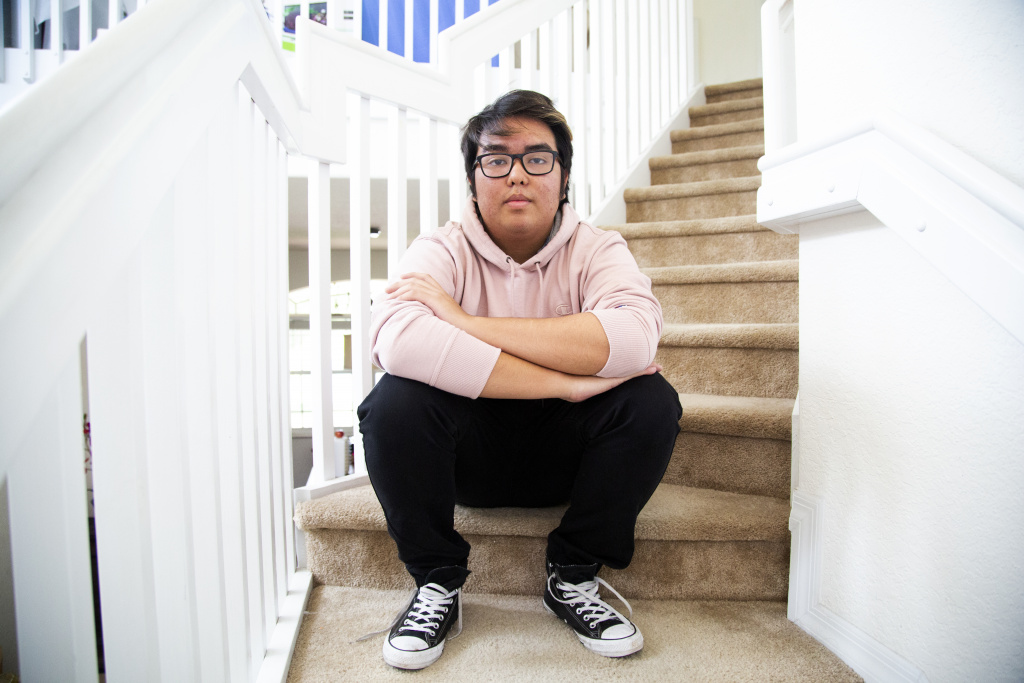 Lukas Paredes, 17, poses on the stairs of his home. (Photo by: Steven Lee)

Over the past 20 years, suicide rates have increased in the United States, with conflicting answers as to why. But while suicide is the second leading cause of death for ages 10 to 24 nationwide, the Florida average for that age group is 6.6 points lower than the national average of 13.1 deaths per 100,000 people.

These numbers fluctuated in recent years, but in Miami-Dade, suicide rates among teenagers decreased from 4.9 to 3.2. Florida’s rates among all ages increased. Even so, suicide attempts by young people such as Paredes are a concern for mental health experts in the South Florida area.

“People tend to keep their nose to the grindstone,” Silverman said.

A 2016 American Psychological Association survey also showed that 63 percent of Americans attribute their stress to uncertainty about the nation’s future. But while living in a high-stress society is difficult, lifestyle changes add another factor to those advancing to college life and adulthood.

The Counseling Outreach Peer Education, or COPE, at the University of Miami, tries to ease such major transitions by advocating for mental health awareness.

The group encourages students who need help to use the university’s on-campus counseling services. They aim to eradicate the stigma surrounding mental health.

“COPE is committed to making sure the [university’s] community is aware of what resources they have,” said COPE board member, Kendall Mather. “I think it’s especially important to encourage people who need it to seek help.”

COPE also collaborates with The Clothesline Project, a group that raises awareness about and offers assistance to men, women and children who are victims of violence. As part of their namesake, the group hangs T-shirts in honor of survivors, but events like this can only do so much to combat the issue of suicide.

Paredes believes that stress is a major factor in his suicidal thoughts.

“I tend to just bottle things up inside,” Paredes said. “A tiny amount of stress like a low grade could trigger an episode for me.”

While organizations like COPE emphasize raising awareness and providing resources to those in need of help, many of those most in need of their resources are hesitant to seek them.

“Instead of going for help, I just wanted to take it into my own hands,” Paredes said.

Paredes has not only struggled with this himself, he has seen others resist help from outside resources, too.

“I’ve lost three friends to suicide and nearly another to the same cause,” Paredes said. “When it came to the point of where me and my friends tried to help, it was too late.”

This issue does not solely reside among the young, statistics show. The elderly community faces a different kind of struggle. Florida residents aged 60 and older have a higher suicide rate than other demographics.

Silverman believes a contributing factor is that senior citizens aren’t as admired as they used to be.

“Old people are cast aside in today’s society,” Silverman said.

From 1999 to 2016, the suicide rate among Florida elderly increased from 20 deaths per 100,000 to 20.9. A report from the Center for Disease Control showed a 10.6 percent increase in all suicides in Florida during that same time period.

Groups like Healing After A Loved One’s Suicide, HALOS, approach this problem from a different angle. HALOS is a Florida-based organization that aims to provide a comfortable, safe space for those who have lost a loved one to suicide. With five Florida locations, the organization’s mission is to create a world in which all people understand the value of life.

Jackie Rosen, CEO of the Florida Initiative for Suicide Prevention, said that more such options are needed.

Paredes believes some suicide trends can be attributed to a stigma in society that sees depression and sadness as synonymous. Such a misconception, he believes, invalidates the severity of his situation. Those assumptions discourage people facing mental illness from reaching out.

“More and more people are struggling to find meaning in an increasingly meaningless world,” Paredes said. “It’s a really hard thing to do — to open up.”