The most beneficial detriment to society

After his SAT scores were invalidated because his phone was out, James Young faced a hard truth: he was addicted to his smart phone.

“I have such a strong reliance towards my phone, and it often interferes with my daily responsibilities like my school work and family,” he said.

Excessive social media use is among the leading causes of technological addiction. A poll conducted by TechTimes, a digital media news source, reported that 50 percent of teens feel addicted to their devices, while 59 percent of parents are aware of this addiction.

“The cellphone can be both beneficial and positively impact if one uses it appropriately, but can also impede one’s progress if used incorrectly,” said Dan Sarfati, a neuro-linguistic programmer and recovery coach based in Miami. “To rely simply on an electronic device defeats the whole purpose of having a brain.”

Currently, Young is a rising freshman at the University of Central Florida in Orlando, coincidentally the same city where his addictive behavior began.

“My addiction started at Universal Studios in Orlando, when I was a freshman in high school,” Young said. “I was getting off of a ride and saw a sign with the theme parks Instagram profile. My parents told me not to download it, but obviously, like a normal teen I didn’t listen.”

According to Sarfati, James’ reaction fit the typical addicts’ profile. 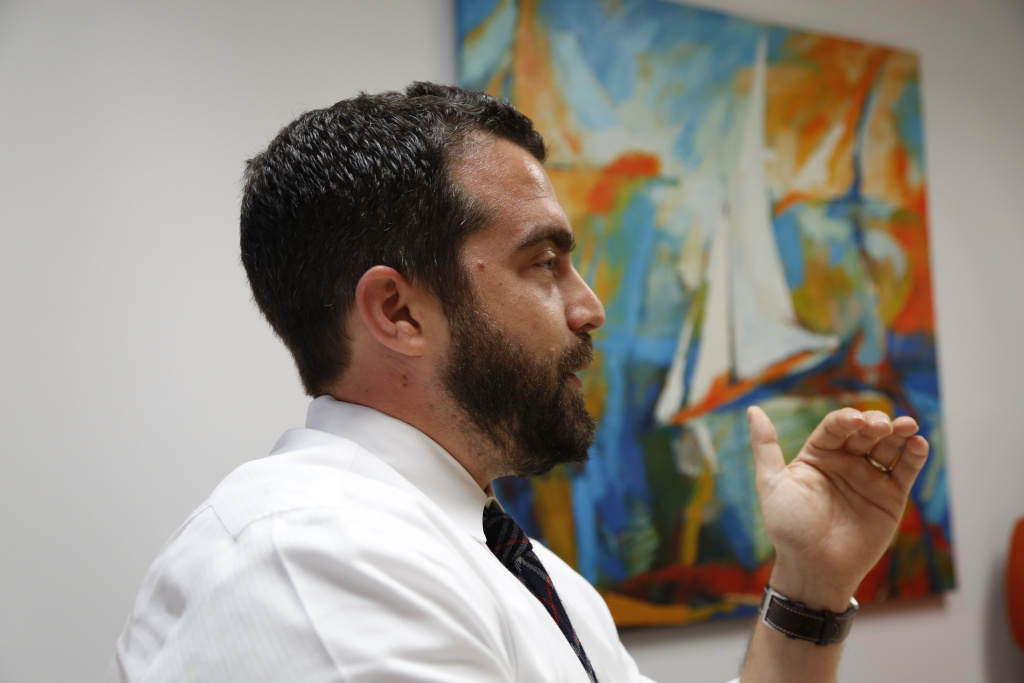 Dan Sarfati, a neuro-linguistic programmer and recovery coach based in Miami, speaks about the influence of cellphone addiction. (Photo by Franco Luis)

“Apps are designed in such a manner to mold a person into becoming more egocentric,” he said. “We get addicted to competition, that layer of egocentricity is how we go ahead convey our image to third parties, and how they’ll take what’s on social media and use that to augment or mold what their images are.”

Sarfati notes that aside from the psychological effects, some physical effects of addiction include irritability, low threshold of tolerance and withdrawing socially. Addicts can rarely recognize the changes on their own.

James had previously justified his heavy dependence to his phone as being a “generational thing” but when his classmates confronted him about their concern for his excessive cellphone use, he eventually heard the message.

“Over-consumption of it [technology] can really affect your character composition and personality,” said Monika Kreinburg, a mental health therapist.

Kreinburg believes that this issue has to do with the general upbringing of today’s youth and their greater access to technology, compared to past generations.

“Due to the fact this younger generation is so used to these apps, there’s no way not to be attached to them,” Kreinburg said. “Much of the addictive component has to do with parenting, and the boundaries in place specific to each child.”

Young now views himself as a recovering addict, and has worked with his school counselor on a program to minimize phone time. Where he once photographed his lessons off of whiteboards, he now writes them down in his planner. He now uses an alarm clock in place of the alarm on his phone. Because his parents have forbidden him from bringing his device to the kitchen table, he no longer reads his phone during meals.

Despite these steps, Young’s progress has been erratic. He still gives in to his desire to use the phone, but he remains persistent.

“I’m recovering from my addiction at the moment, and it hasn’t gone as planned but I am working through it,” Young said.

This persistence is key to success, according to Sarfati.

“It’s discouraging to work so hard towards a goal and then come up short,” Young said. “I know my efforts aren’t going to be rewarded overnight, and that’s why I keep at it everyday. I just hope I can one day break out of this addiction completely.”