Unplugged by choice or by force

Mildred Collier watches the same TV show, day in and day out. She has no choice really.

Collier, 59, lives in Liberty Square, a Miami-Dade public housing complex in the Miami neighborhood of Liberty City. Paying her electricity bill on time can be a challenge, so cable and internet service are out of the question.

“I don’t like to talk about it too much because then I start to cry,” Collier said. “I’m really in a depressed state.”

Typically, for people of lower socioeconomic status, disconnecting from technology is not a choice –- their wallets make that decision. Meanwhile, others have more options. They can be completely plugged in or choose to log off when they want. This digital divide, whether by choice or circumstance, can either hurt or help, depending on what side you are on.

There are different degrees of the unplugged spectrum. Some who consider themselves unplugged might rarely use Instagram but FaceTime friends every night. For others, it means having a flip phone and not being active on any social media sites whatsoever.

Emily Espinosa, 17, a rising senior at the School for Advanced Studies, considers herself relatively unplugged.

“I have had Snapchat for about 4 years just so that I can talk to my friends,” Espinosa said. “I probably spend about an hour per day on it, tops.”

For those who cannot find even 30 minutes of free time to make dinner, spending an hour on a social medium may seem like an eternity. For many millennials, that is nothing. Espinosa worries about those who spend so much time on their electronic devices.

“It’s not healthy to be on your phones for 10 hours a day. I would rather see my friends in person and not be on my phone the whole time,” she said.

Monica Bodenstab, a recent University of Miami graduate, has cut back on social media. She used to be on Twitter, Snapchat, Facebook and Instagram but now only uses the latter two. 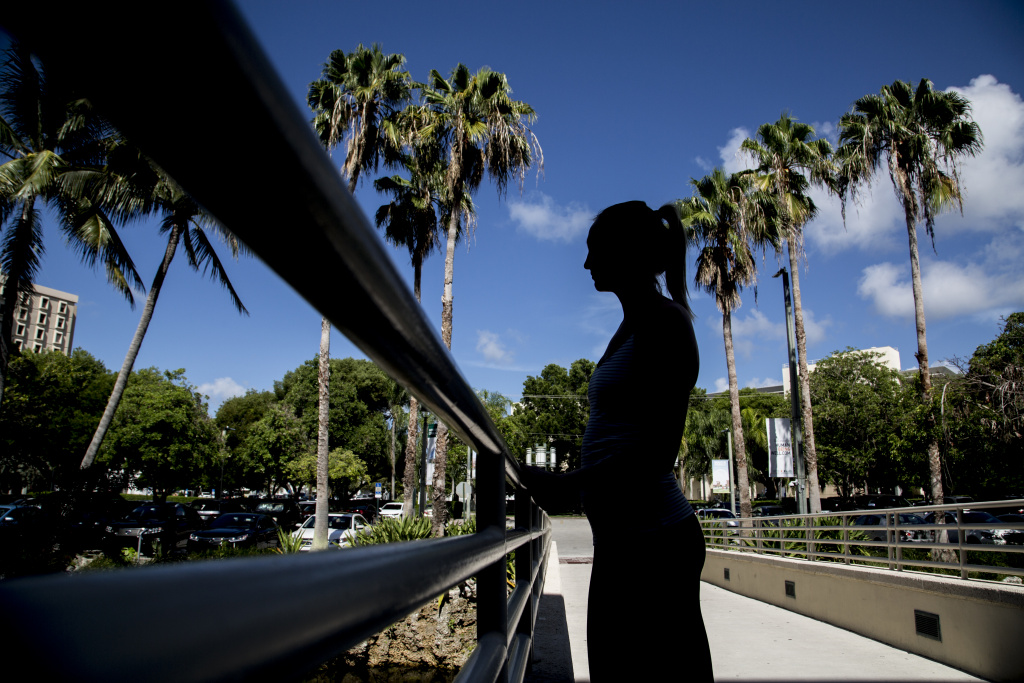 Monica Bodenstab, 21, has deliberately isolated her identity from most social media platforms. (Photo by Ashley Acevedo)

“Taking a picture to preserve a memory is one thing,” Bodenstab said. “But I get annoyed when I’m out with friends and they are taking the same picture 40 times for social media.”

On the other side of the disconnected spectrum, many people are unplugged by circumstance. Various digital deserts in Miami, where there is limited or no internet service, affect almost half of Miami-Dade residents.

“I’ve been really miserable without Wi-Fi,” Collier said. “I used to have a cell phone but it depends on whether my niece pays the bill. And she has six kids, so I can’t ask her to help me out all the time.”

In 2015, a Florida International University study ranked Miami the second worst connected city in the United States, with almost 42 percent of Miami-Dade residents lacking home internet service. The year before, it was ranked No. 7.

“There is a huge portion of communities that do not have internet connection,” said Jim Osteen, executive director of South Florida Digital Alliance.

The areas in Miami with the lowest percentages of internet service are Opa Locka, Hialeah, Coconut Grove, Little Haiti and Liberty City.

“It’s 100 percent economics,” said Don Slesnick III, SFDA’s deputy director. “If you have a low income household and they have to choose between rent, groceries and Internet service, they are going to choose rent and groceries.”

“There is a whole community that wants to have it,” he said. “But they just can’t afford it.”

SFDA has partnered with Memorial Healthcare System, which donates computers and other equipment.

“Every month we get rid of about 25 to 30 computers,” said Tim Curtin, administrative director of community services at Memorial Healthcare System. “The computers get so much use when we put them out into communities.”

Other area initiatives have worked to expand internet access in South Florida. The Miami-Dade Public Library System introduced a “techno bus” in an attempt to bridge the divide between those who have computers and online access and those who do not.

The Department of Housing and Urban Development also extended a program with Comcast that brought Internet service to all residents of Miami-Dade public housing for $9.95 a month.

“Connection is the key word,” Osteen said. “Talk of the internet and technology isn’t sexy, but I think there is a call to action or at least to raise awareness.”