Vietnamese nail down a niche in the South Florida economy 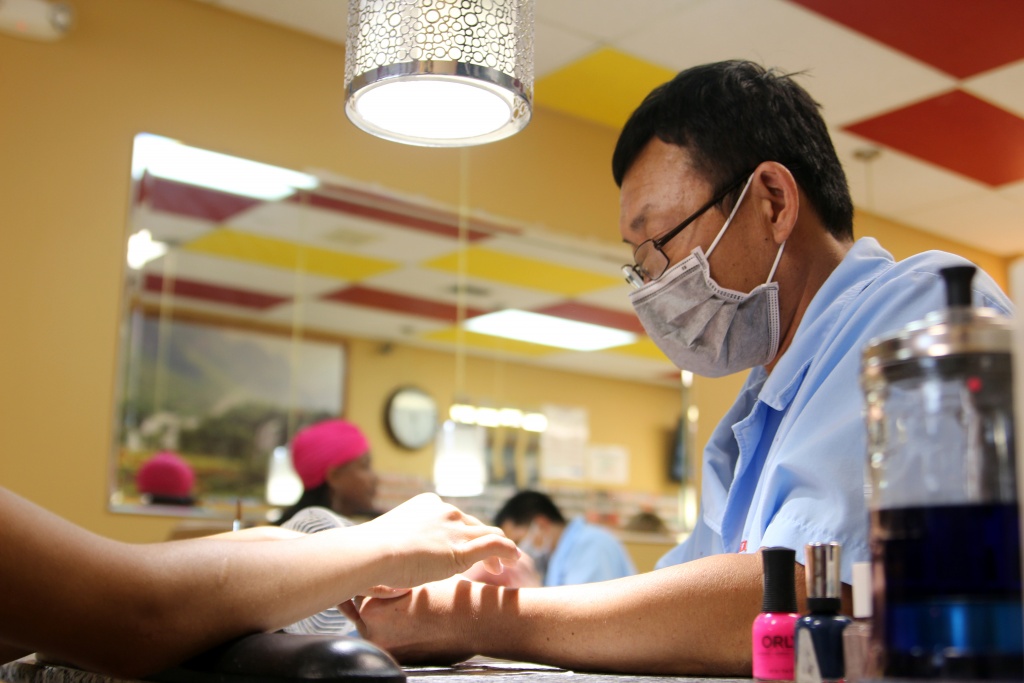 Cong Nguyen’s eyes sparkle with hope as he drills, buffs and polishes a client’s nails. As a Vietnamese nail salon owner, he sees those nails not as his success, but as security for the next generation.

“I didn’t come here for this job. For this job, I stay in my country,” Nguyen said. “I came here for my kids and their future, for a better life.”

For many Vietnamese families, America is the land of opportunity, and the cultural diversity of South Florida helps them flourish within the nail industry.

Vietnamese-owned nail businesses trace their roots back to Hollywood actress Tippi Hedren, known for her starring role in Alfred Hitchcock’s “The Birds.” After the fall of Saigon in 1975, she volunteered as an international relief coordinator at a refugee camp near Sacramento, California. The Vietnamese women there were interested in Hedren’s glossy nails, so she invited her personal manicurist, Dusty Coots Butera, to teach them how to do manicures.

“I rented a bus and sent them to Sacramento to go to beauty school to get their licenses and off they went. And they all passed,” Hedren said in a telephone interview from her California home. “I’m very honored that this has happened. It’s artful, it’s creative, it’s financially lucrative, and it’s perfect for them. I loved those girls, I absolutely loved them”

Now, 41 years later, Vietnamese nail salons dominate over half of the $9 million industry nationwide, according to NAILS Magazine and Statista.

As the third most popular destination for Vietnamese immigrants, South Florida has a large share of Vietnamese-owned nail salons.

“South Florida reflects their cultural togetherness and their ability to help each other in this area,” said Erika Kotite, editor for NAILS and VietSALON Magazine. “Florida has a huge appetite for nail services based on culture, style and a lot of other factors.”

An estimated 12,000 Vietnamese immigrants live in South Florida, according to the Migration Policy Institute. NAILS Magazine reports that 48 percent of nail salon owners nationwide have a spouse and children.

“A lot of times families go to the same areas [and stay for] multiple generations and decide on the nail business,” Kotite said. “They help each other and pool their resources and their salons and help their families get established, which is why there is such tremendous growth.”

“They fueled the competition, they forced salons to be competitive, they forced nail salon owners to modify their services, and it stratified the market into all these different niches,” Kotite said. 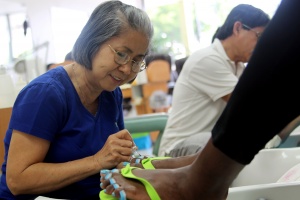 A King’s Bay Nails customer gets a pedicure. (Photo by Marlowe Starling)

Diana and Duc Huynh opened King’s Bay Nails in 2007 and have lived in Florida for more than 30 years. Their daughter Anna Huynh and son Hui Huynh were born in Miami. Anna went to beauty school to become a certified technician during her sophomore year of high school and now enjoys the comfort of working alongside close family and friends.

“After a while you get used to it, and it isn’t like a job anymore. It’s like a routine,” Anna said. “I just get to be myself here.”

Magic Nails, located in a Cutler Bay strip mall, is owned by Cong Nguyen and wife Linh, who opened the salon in 2007.

Michelle Nguyen, Cong Nguyen’s 14-year-old daughter, was born in Vietnam and moved to Miami in 2006.

“[My mom] has met so many nice customers and clients who have helped us overall with learning English,” Michelle said. “They’re really kind and patient with us.”

Michelle’s fourth grade teacher and client at the salon helped Michelle’s mother pass her citizenship test by quizzing her during manicures.

“Without working at nail salons, we wouldn’t be here,” Michelle said. “[My grandmother] said we’re very grateful to have something, an occupation, to keep us here.”

The first three months after opening were slow due to their difficulty speaking English on the phone.

“I told my wife to try, try [to keep the salon open]. Now it’s busy,” Cong Nguyen said. “We take care of customers. That’s why they come back.”

Erica Chapell, 25, is a stay-at-home hairdresser and has gone to Magic Nails since middle school. She now brings her seven-year-old daughter.

It’s the uplifting atmosphere and dynamic conversation that draws newcomers.

“This is the first time I have come to a nail salon that’s this happy. This place is exciting,” said Redie Testa, a first-time visitor from Virginia Beach. “These people talk, they’re friendly, and I love the way the customers joke with them. I’ve never seen this before.”

“The wonderful thing is that it’s been a wonderful way for the women to make a living for their children. Some of their kids are going through college now,” she said. “It’s been a godsend.”